Penguins overwhelm Habs below the dots

In snapping a three road losing streak, the Penguins played a style tonight in their 4-1 win over the Montreal Canadiens that as Mike Sullivan said afterwards — ‘makes them harder to play against’. —

Shots in the game were just a 26-20 advantage Pittsburgh with the Canadiens having a 51-49 edge in 5 v 5 shot attempts.

Where the Penguins overwhelmed the Canadiens was below the dots, with great net-front play, creating offense behind the goal line that led to goals and winning battles for the puck when out-numbered.

While the Penguins were often playing on the right side of the puck defensively, the Canadiens were not.

Pittsburgh opened the scoring with an Ian Cole goal at 14:52 of the first period. Key plays on the goal was a controlled entry by Evgeni Malkin then a net-front presence by Patric Hornqvist with a little help from Zach Redmond being on the wrong side of the puck and screening his goalie. Cole blisters a shot past Price who never see’s it. 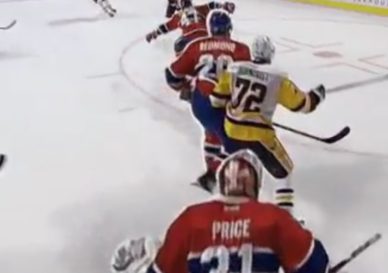 The Penguins in the second period then go up 2-0 on a goal from Eric Fehr, where Trevor Daley has a nice keep in, while Scott Wilson and Chris Kunitz make skilled plays below the goal line and Fehr buries one for his sixth of the season.

They would strike again on a Jake Guentzel tip-in goal in the second that was all set up by Guentzel’s ability on the forecheck.

As noted before about Guentzel during his first call up, he might be undersized but he’s an excellent forechecker. He has great hockey sense in attacking defensemen who are retrieving the puck with the proper angles that force players to their backend. The lead up to his goal tonight was textbook forechecking by Guentzel.

After Guentzel delivers an initial hit on Petry, the Penguins come out with the puck while out-numbered 3-to-2. This was a constant story in the game. 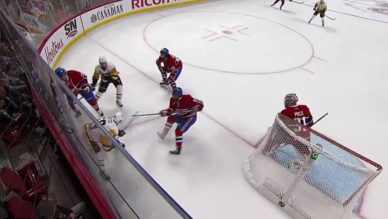 “He plays the game the right way. Has really good hockey sense,” Sullivan said of Guentzel who has 4 goals and 2 assists in seven NHL games this season.

— Eric Fehr showed again tonight that his best position is center. He put some good tape out there tonight for a team or two that’s mulled trading for him as a center.

With the Crosby line (15/24) and the Bonino line (6/15) bledding shot attempts tonight, the 4th line provided a needed impact with a goal and drove possession at better than 65%.

Wilson – Fehr – Kunitz were on the ice together for 16 shot attempts, 7 against at even strength.

“I thought they were real solid. Gave us a spark,” Sullivan said of the 4th line.

— The Penguins limited the Canadiens to 12 shots through the first 40 minutes.

“We had some pretty good structure. I thought we made pretty good decisions with the puck,” Mike Sullivan said of his club.

— After Matt Murray allowed seven goals Monday night, Marc Andre Fleury being passed up to start tonight against his hometown team had to be a punch to his gut.

Fleury relishes every opportunity to play in Montreal. One of the few times Penguin players ever saw Fleury visibly angry To read this insider news, subscribe to get “Inside Access”!

Simply Dusty, what did you see tonight? I need a good laugh and your posts always make me laugh.

That’s all you got? You must have copied and pasted that. Great post Same.

Rust looked good there, redeeming play by Crosby too

Yep, that was a pretty play.

So… Sid sees the breakdown at the blueline, watches the play unfold before he backs off. Great play Sid… that one is assisted by you as much as anything

So far two dumbshits didn’t see the simple fact that Crosby choose to stay in the offensive zone on what was at best a 50/50 play, one which nearly every blue liner in hockey not named Karlsson would have backed off to make sure they could help cover the potential break away!

What a dirt play by Ward… what a fucken child.

That should end the drive to 23

Having this youth is huge right now. If they fill out this team the way they are right now, we’re going to be a really tough out.

Skinner is an embarrassment. He falls down every time he gets touched. Obviously not American.

Hahaha finally got em. What a pussy.

Bennett is an embarrassment he gets. Injured every time he hits the ice obviously not Canadian

I’m tired of Rust being on the top line. I’d like to see him and Kessel switch spots.

Maybe, I know hbk hasn’t been the same but that depth was huge last year…

True. I just wish there was another option. I love Rust’s game. Just not with Sid.

Not to mention Kessel and Crosby look like oil and water together.

What stupid stuff has Same, Yoda and Dusty posted tonight?

I think there’s more Pens fans in Carolina than Hurricanes.

Did they take back his Obama Phone?

You have to be the most useless individual ever born into this world.

Was that on thefourthperiod.com? Will your mom be buying the blackberry for him?

Hey npl you fat fuckk how was Drouin’s goal last night and how is Johnson doing this year I was right the minute Americans sign big contract they start conning. Drouin less game more points and gets paid way cheaper then your fellow American fraud Johnson

This would be a good point, if Toews didn’t turn into Jordan Staal after signing on for $10.5 million a year. Unless sammich is claiming he’s american.

I also like how he mentions Drouin as an example, a guy that got sent down and quit playing.

No doubt hey… guy fucken cries because he isnt getting ice time because he refused to play D. All kids should apparently aspire to be like Drouin. 50 bucks says Johnson is more liked in the locker room lol. Drouin has a rep since Jrs.

Does Kessel like to play D and I am sure and bet 100$ he was not liked in other locker room before arriving to Pittsburgh .even team USA didn’t pick him

Lol, look how that worked out for them. Other than the fact that everyone that’s ever played with him has spoken well of him it’s the exact same thing. Drouins a known kunt

Sure enough, fatty mcfatt fatt calls out “chubby” and then “chubby” scores.

Be nice to NPL if you want him to come back.

According to Dave Pagnotta….

And got pulled again lol twice in 1 game

Who cares about playing in Montreal. It’s a city of gay French fucks.

As for the goalie situation, I don’t care for that worthless debate. Penguins are in the best place to win if they keep both. Only thing that changes that is a top 2 d man.

I think the pens keep Fehr. He’s the type of player they try to add every year at the deadline, why not just keep him? PK, plays up and down the lineup at wing and center. The only reason to trade him is if they need depth defense. I don’t see this duchene thing working out.

When fleury in net team allows 30 plus shots

Is st bleury a professional or a child? You can’t throw a hissy fit if you don’t play in your home town! The pens are over paying him by 4.75 million dollars. He should be happy and stfu

I mean – you throw a hissy fit every day – all because he didn’t call you after sex. So the hypocrisy is kinda ridiculous.

#triggeredfraud is there anything that doesnt fire up your loins in relation to MAF?