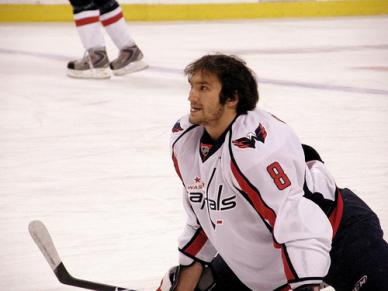 Alexander Ovechkin is one of the most unique hockey players in the history of the game as he possesses a scoring ability that rivals some of the games greatest players but what makes him unique is that he plays a physical style to go along with his goal scoring prowess.
The physical type of game that Ovechkin plays is a very rare trait from a goal scorer who has scored more goals in his first four seasons than Mario Lemieux (215) did.
Ovechkin lit the lamp against the Penguins in the first two games of the series, scoring four goals and recording 21 shots on goal.
It was expected that Brooks Orpik and Sergei Gonchar would get the primary duty of slowing down Alexander Ovechkin.
In Games 1 and 2, Bruce Boudreau opted to match Alexander Ovechkin against the Penguins pairing of Rob Scuderi and Hal Gill.
With the series moving to Pittsburgh, Penguins head coach Dan Bylsma went with
the same matchup and the Penguins had a much better result than they had in games 1 and 2.
On the scoresheet it would appear Ovechkin (goal, assist) got the upper hand on the Penguins but Ovechkin’s first period goal was a fluke goal and he did not have the kind of impact he had in games 1 and 2.
The Penguins were able to limit Alexander Ovechkin to five shots on goal and their containment of Ovechkin can be attributed to their gap control.
In games 1 and 2, the Penguins were sitting back at the blueline and back peddling too much. Tonight it was a different story as the Penguins were aggressive with Ovechkin at the blueline and forced him to the outside. They tried to limit his ability to cut to the inside like he did freely in Game 2.
For the rest of the series, limiting a player like Ovechkin is going to be a very difficult task but the Penguins must contain Ovechkin to the outside and show great gap control like they did in Game 3 if they want to be successful in limiting Ovechkin from taking over a game like he did in Game 2.
Photo Courtesy of Dan4th