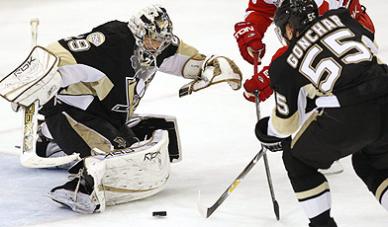 Series tied 3-3
Marc Andre Fleury made 25 saves and Jordan Staal, Tyler Kennedy each scored as the Pittsburgh Penguins beat the Detroit Red Wings 2-1 Tuesday night to force a Game 7 in the Stanley Cup Finals.
Coming off a 5-0 loss to Detroit Saturday night, the all important first goal fueled Pittsburgh’s win as Jordan Staal scored 51 seconds into the second period, Pittsburgh jumped out to a 1-0 lead.
Staal had his finest game of the series, scoring the opening goal and having a strong night in the face-off circle, winning 57% of his draws.
The former 2nd overall selection picked the right time to have his strongest performance of the series.
Minutes after the game, Staal was already looking forward to game 7.
“Yea it’s a great feeling but it doesn’t end tonight,” Penguins forward Jordan Staal said
Pittsburgh’s role players played an instrumental role in Pittsburgh’s 2-1 win as Staal and Kennedy combined for three points and defenseman Rob Scuderi played his best game of the series.
After Tyler Kennedy scored at 5:35 of the third period to put the Penguins up 2-0, Marc Andre Fleury and Rob Scuderi became the heroes of the night.
Marc Andre Fleury made a number of key saves in the third period, stopping Dan Cleary on a breakaway with less than two minutes remaining in the game.
The Red Wings poured it on late in the game and Rob Scuderi made the save of the game laying in the crease and blocking a shot from Johan Franzen that was headed into a wide open net.
Fleury was the story of night rebounding from Saturday night’s loss, when he was pulled from the net after giving up 5 goals on 21 shots.
Fleury put the loss behind him and has the Penguins in an unbelievable opportunity.
” It’s an unbelievable opportunity, we weren’t thinking about last year at all,” Sidney Crosby said. ” We found a way to survive, that’s what we had to do and now it is anyone’s game.”
Pittsburgh had to find a way to survive and they survived on the backs of their role players and Marc Andre Fleury.
It was a boost for the team seeing role players such as Matt Cooke, Rob Scuderi, Jordan Staal and Tyler Kennedy taking the spotlight.
Pittsburgh was the more physical team out hitting Detroit 35-24, establishing an effective fore-check and high marks have to go to the Penguins penalty kill as the Penguins killed two Detroit power plays late in the third period.
Now the Penguins have an amazing opportunity to claim their first Stanley Cup Title since 1992.
Game 7 is Friday Night