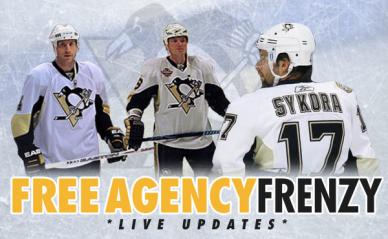 Update on the trade talks we mentioned around 12:30 p.m. — Penguins have tried to land winger David Moss. Calgary has been pushing Curtis Glencross. Nothing on that front right now but the Flames are interested in Godard and Dupuis.

Penguins have made a 1 year contract offer to a veteran goaltender. It is 2-way deal worth $685k at the NHL level according to multiple sources. Earlier in the day the Penguins inquired about Kevin Weekes.

The Minnesota Wild have signed Martin Havlat and Chuck Fletcher makes his big splash. Fedotenko still on the Wild radar and Havlat, Fedotenko are represented by the same agent but it remains to be seen if there will be enough space for Fedotenko or Scuderi once the Wild finalize a deal for Saku Koivu.

While Pittsburgh waits for Rob Scuderi, they are exploring Plan B options. One scenario the Penguins have explored is pursuing defenseman Nick Boynton. I’m told Pittsburgh has approached his camp about a the possibilty of a one year deal, a scenario similar to Ruslan Fedotenko last season; Opportunity to Increase market value for next year by playing with championship caliber team. Boynton is a player the Penguins have been high on for sometime but he will have to take atleast $900k-$1 million reduction in pay.

The Minnesota Wild are involved in negotiations with Allan Walsh the agent for Marty Havlat.

Brian Gionta has landed a five year deal worth $25 million with the Montreal Canadiens according to RDS.ca. It was very clear early in the day the Penguins were not going to be a player for Gionta who made $4 million per season.

As expected the New York Rangers have signed Marian Gaborik. They have been the favorites all afternoon. The deal is 5 years worth $37.5 million per TSN.

Scuderi is reviewing his offers and will trim his list down to three within the hour if he hasn’t already, although a decision may not come tonight. Last I heard he had offers from the Minnesota, New York Rangers, LA Kings, Dallas Stars. There could be others but the Florida Panthers have made a late inquiry. Scuderi’s camp expected the Islanders to join the sweepstakes once they missed out on Mike Komisarek but it has been very quiet from their end so far. Two teams in on Scuderi are also in on Francois Beauchemen.

Mathieu Garon has agreed to a two year deal with the Blue Jackets.

The LA Kings, New York Rangers and Minnesota Wild are among three teams expressing interest in both players. With both players represented by the same agent, it has led to speculation that both players could land at the same destination. Update on the rest of Fedotenko’s suitors in a bit.

Strong interest in Ales Kotalik. Three suitors for Petr Sykora including the Penguins. TIOPS has the latest

A source close to Sykora indicates three teams have expressed an interest in Sykora. Detroit was one of the teams. Mike Babcock coached Sykora in Anaheim but I don’t see him being a good fit there. Pittsburgh has discussed a one year offer with him. Kotalik remains on the Penguins radar. Expected to land a two year deal. Not sure he is going to get it from Pittsburgh.

Thrashers may have some company in their pursuit of Nik Antropov. Kings, Canadiens, Blues and Wild showing interest. Penguins are not involved.

Penguins made a two year offer to Steve Sullivan but it wasn’t enough as the veteran forward re-signed with the Predators.

Rangers waiting to hear back from Rob Scuderi. Others remain in the mix including the Penguins. Minnesota’s offer to Scuderi remains on the table despite the signing of Zanon. – Penguins have officially signed defenseman Brian Strait to a three year deal

The Toronto Maple Leafs have signed Mike Komisarek per TSN. The deal is for 5 years worth $22.5 million. The Rangers and Islanders were the finalists.

I’m hearing the Penguins are shopping defenseman Mark Eaton, forwards Pascal Dupuis and Eric Godard. Teams is serious about trying to re-tain Rob Scuderi and also have their eye on a few UFA forwards including Ruslan Fedotenko.

Canadiens have agreed to a five year deal with forward Mike Cammalleri. Cammalleri was on the radar of the Wild, Rangers, and Leafs.

Godard and Dupuis are being packaged to save more than $2 million per season on the cap. more to come

The Montreal Canadiens have signed Hal Gill to a two year deal worth $4.5 million. Penguins are very surprised he received that kind of money.

Penguins have signed forward 4th line forward Mike Rupp to a two year deal worth $1.65 million. I’m told this move could be playing a factor in Calgary trade talks. As we mentioned earlier the Flames and Penguins have been talking with the Penguins shopping Dupuis/Godard as a package.

The Rangers have extended offers to Marian Gaborik, Mike Komisarek.They remain engaged with talks with Rob Scuderi but are waiting on one of their big three targets. If they land Gaborik or Cammalleri who they are expressing interest in that puts them out of the Komisarek sweepstakes. Rangers are also in on Chris Neil, Ruslan Fedotenko.

Penguins making a pitch for Steve Sullivan? TIOPS has the latest

Pittsburgh has discussed parameters of a contract with Steve Sullivan according to a source close to Stephen Bartlett. Two years were discussed but the Penguins may have to contend with the Thrashers who I’m told made a three year offer. Nashville remains in the mix.

Erik Cole didn’t draw much interest on the open market settled for a two year deal worth $5.8 million. Pittsburgh looked into his asking price but nothing more than that.

The Habs looked into Rob Scuderi but as I mentioned earlier he didn’t have much interest in playing in Montreal. He turned down an over-ture from them and they are expected to look elsewhere.

Pittsburgh has expressed some interest in goaltender Kevin Weekes according to a team source. Weekes is a client of Allan Walsh who represented up to 6 players on the Penguins roster last season. Weekes would battle John Curry for a #2 spot

Not that the Islanders and Blues have looked elsewhere, Mathieu Garon is closing in on a two year deal with the Blue Jackets.

Four year offer on the table to Scuderi? TIOPS has the latest

It is believed that Pittsburgh has made Rob Scuderi a four year offer. Still hearing he has offers on the table from New York Rangers, Dallas Stars, Montreal Canadiens, LA Kings and Minnesota Wild.

Pittsburgh has reached out to Steve Sullivan, Ales Kotalik and Taylor Pyatt. Not sure bout the interest in Pyatt but the Penguins like him. Erik Cole is mulling offers. No confirmation if Pittsburgh made any but they did inquire about his asking price earlier in the day.

Ray Shero has spoken to Stephen Barlett about a number of his clients but indications are Brian Gionta will not be a fit. Out of the Penguins price range.

The Penguins have made an 1 year offer (NTC) to Mike Knuble according to a source. There has been significant interest league wide and has received offers from the Kings, Rangers, Capitals, Hurricanes. Updated: 2:40 p.m. – Knuble has signed with the Capitals. Rangers, Capitals were the favorites

Talks with Rob Scuderi are on hold as the Rangers are waiting back to hear from Mike Komisarek. They have made a lucrative offer.

Market heating up for Ruslan Fedotenko. TIOPS has the latest

A Penguins source indicates the Minnesota Wild, LA Kings, Ottawa Senators, Phoenix Coyotes and New York Rangers are in on Ruslan Fedotenko. Pittsburgh offer remains on the table but agent Allan Walsh is trying to use Havlat, Fedotenko as a package deal in talks with Wild, Kings and Rangers. More teams could get in the running.

The New York Islanders have have reached out to Mathieu Garon. Blues Insider Andy Strickland reports the Blues are also showing interest. Ty Conklin also being pursued by the Isles and Blues.

Oilers, Kings, Rangers and the Capitals have been kicking the tires on Kovalev. The market is at $3.75 million per season right now. No comment from Scott Greenspun regarding any interest from the Penguins. Montreal remains in the mix.

Are the Carolina Hurricanes interested in Hal Gill? TIOPS has the latest.

The Tampa Bay Lighting have targeted Hal Gill as a potential target. The Canes have also reached out to Gills’ camp. Pittsburgh remains interested in Gill.

Hearing Rob Scuderi has a 4 year offer worth $13-$14 million on the table from the Dallas Stars. Scuderi remains highly interested in Minnesota. Tampa Bay is not in the mix.

Mike Knuble has received a two year offer believed to be from a Western Conference team. Pittsburgh, Vancouver, NJD, New York and Washington have all reached out to him

As we mentioned earlier Montreal is among 5 teams pursuing Scuderi. Hearing he doesn’t have much interest in playing there.

Curtis Glencross on the Penguins radar?

The Calgary Flames and Pittsburgh Penguins have held talks about sending Pascal Dupuis and Eric Godard or prospect to Calgary in exchange for Curtis Glencross. Flames trying to send another salary to Pittsburgh

The Minnesota Wild have made an offer to Rob Scuderi. Four years according to my source. They are in talks. It is a place he is highly interested in.

The Pittsburgh Penguins have reached out to Stephen Barlett the agent for Erik Cole. Seeking a multi-year deal but Pittsburgh is willing to do a Ruslan Fedotenko type of deal. Unlikely to materialize.

The New York Rangers, Montreal Canadiens, Minnesota Wild and New York Islanders are in hot pursuit of Rob Scuderi. Good friend Rob Rossi mentioned the Stars are interested. Haven’t heard about them to this point.

The Minnesota Wild and Phoenix Coyotes have inquired about Ruslan Fedotenko. There will be others. Wild are also in on Martin Havlat and are trying to get a package deal.

The Penguins made an 11th hr offer to Fedotenko. It was too late.

League sources believe it will be a three team race in the sweepstakes for Mike Knuble; Rangers, Penguins, Capitals. I’m hearing the Capitals will likely be the most aggressive team.

Sources close to Stephen Bartlett indicate Scuderi’s camp is hearing the Tampa Bay Lightning, Minnesota Wild, New York Islanders, Montreal Canadiens and the LA Kings will make offers to Scuderi on day 1 of free agency. They also expect the offers to be upwards of $3.25 million per season. Scuderi’s days as a Penguin are over.

Penguins GM Ray Shero will speak to Sergei Gonchar’s camp  this week to discuss the parameters of a long-term extension. Gonchar is Shero’s #1 priority this off-season.

10:00pm – Pesonen to explore options in the NHL first

Janne Pesonen is drawing interest from Saint Petrsburgh of the KHL, coached by Barry Smith. Pesonen’s agent indicates Janne will explore his options in the NHL first. Believed to be looking for a one way contract. Tampa Bay,  LA scouted Pesonen heavily near the end of this season.  Minnesota could give him a look. As mentioned a week, Pittsburgh has been in contact with Pesonen

8:15pm – Parameters of Contract for Fedotenko

A source close to Fedotenko tells me, the two sides continue to discuss the parameters of a new contract and are “exploring many different concepts” of a potential deal. An official offer has not been made but everything from a 1-3 year deal has been discussed. Both sides expect negotiations to continue through tomorrow’s 12:00 p.m. deadline