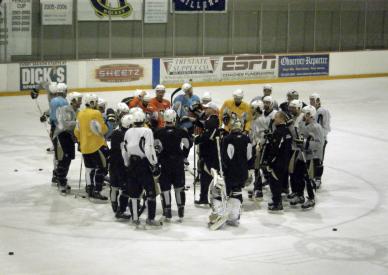 The Pittsburgh Penguins went through their final practice this morning before Game 1 of the Eastern Conference Finals which begins Monday night
Defenseman Sergei Gonchar returned to the ice this morning after taking Saturday off.
Gonchar’s skating was very good today and he is nearing 100% health. He has been improving everyday and there is no question that he will be in the lineup Monday night.
Gonchar rotated through all drills as the Penguins ran 7 defensemen this morning and worked with the 1st power play unit.
Gonchar was getting a lot of zip on his shots as he is able to plant off of his right leg and his lateral movement from side to side is much improved from Wednesday.
The Penguins are going to have their top defenseman near full health for Game 1.
News and Notes from Today’s Practice
High intensity is how to describe today’s practice as the Penguins prepare for the Carolina Hurricanes.
The Penguins went through a number of flow drills in the first 15-20 minutes of practice. One thing Dan Bylsma has established since being named head coach is that there won’t be a lot of standing around in practice.
The Penguins then went through some cycling drills and 3-on-2 drills before getting in some power play work which the Penguins do just about every practice.
Penguins use 7 defensemen in drills
Defenseman Alex Goligoski skated as a forward in today’s practice with the 5th line as the Penguins rotated through seven defensemen.
Goligoski skated with

Petr Sykora and Eric Godard. All three players will be healthy scratches on Monday.
Lines in practice
Kunitz – Crosby – Guerin
Fedotenko – Malkin – Talbot
Cooke – Staal – Kennedy
Dupuis – Adams – Satan
5th line: Goligoski – Sykora – Godard
The Penguins made 5 call ups today but none of the call ups were on the ice this morning.
Power Play Set up
1st unit: Guerin – Crosby – Malkin
Letang – Gonchar
*Notes – The Penguins were moving the puck very well as the Penguins penalty killers appeared to be more aggressive than they are in games. The Canes will be aggressive on the PK and the Penguins were trying to enact that in today’s practice.
Sergei Gonchar was strong, making quick passes and getting pucks to the net. Very impressed with his performance in practice today, including the power play.

The Penguins seem to trying to sneak Bill Guerin into the soft spots in the slot and look for that one-timer. Guerin is dangerous from that spot and the Penguins have been working on that set play for the past couple weeks.
2nd unit: Kunitz – Staal – Satan
Eaton – Boucher

Chris Kunitz, Jordan Staal and Miroslav Satan all scored goals for the Penguins second power play unit. When watching Chris Kunitz over the past couple months in practice, he is just not a goal scorer. This is not a knock on him but he doesn’t release the puck quickly enough.
That appears to his main issue right now. He is waiting too long to get rid of the puck and goalies are able to set.
Miroslav Satan is playing with confidence for the first time all season. He was among the best players on the ice this morning.
Fitzgerald working with Craig Adams
Assistant Coach Tom Fitzgerald has been working on the side quite often with Craig Adams as the two have worked on face-offs and Adams’s alignment on the penalty kill. He was doing the same again today.
Guerin breaks in new gloves.
Bill Guerin was wearing new gloves today and head coach Dan Bylsma was trying to break them in giving Guerin a few wacks as the two were having a conversation at center ice. The two have developed a good relationship.
* The Carolina Hurricanes practiced in Raleigh today and will depart for Pittsburgh this afternoon. Forward Rod Brind’Amour practiced today and will play in game 1.