Tensions have been sky high throughout the Penguins organization of late. A 4-3 win vs the Minnesota Wild tonight isn’t going to change that but what the Penguins desperately needed tonight was one of their stars, whether it was Sidney Crosby or Evgeni Malkin to not only do something but put on a show.

Malkin took the honors tonight in a dazzling performance that included a highlight reel goal in the second period. He was in on all four goals with a 2 goal – 2 assists night. For the first two periods the fans were entertained but a star player putting on a show for the Penguins has become such a rarity around here anymore, if the Wild would have came back and won after being down 4-1, the game would have still likely been seen as a positive for the Penguins. Among the reasons:

1. Malkin took over the game

3. The battle level of the stars was above the line.

Tonight was Malkin’s first four point game in over 90 regular season games and his first multi-goal game in 34 games (including post-season).

Is tonight’s win a sign of things to come?

Don’t get your hopes up just yet. As stated before this is going to be a roller coaster season with this group and really on a game-by-game basis.

One thing the Penguins continue to prove is they haven’t quit on their coach. They responded for Johnston after the 0-3 start….. third period vs Montreal last week…… and responded today with a good response game after playing the type of game Saturday vs the Devils that reminded some of the Toronto game in 2009 that was Michel Therrien’s last game behind the bench as Penguins coach.

While the Penguins continue to prove they haven’t quit on Johnston, what upper management is trying to get their head around is whether Johnston can pull through and be the answer to getting consistency installed into this team. So far the answer has been no but every time the Penguins look like they might be hitting rock bottom and a bad loss tonight would have had them heading there, this group has pulled through under Johnston.

As Jim Rutherford has been looking trade [hide] route more so than making a coaching change, Johnston still got type of performance he needed out of his group to take some tension out of the room because the players also hear the noise. 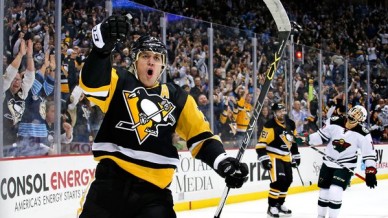 — Mike Johnston had no update on Olli Maatta but there was obvious concern. “I don’t have an update. I know when he was leaving the rink everyone was concerned,” Johnston said. Johnston was not happy with the gate being open. “My replay was on the screen. Issue I have, why was the gate open? “Dangerous, dangerous play when gate is open like that.”

— No points for Sidney Crosby but Johnston loved his game. “Sid was outstanding To read this insider news, subscribe to get “Inside Access”!

Kunitz may not score much anymore but he’s one of a few Penguins that plays with a mean streak and is not easy to play against.

And they knew this would happen – he’s functional – just not on the 1st line anymore.

I’m not surprised – it was a penalty, but if that door doesn’t open, it’s just an illegal check.

Totally agree, its just unfortunate for Maatta and for the team if he’s out long term. Wondering if this will force GMJR to make a trade. Don’t think the Pens should trade more futures for bandaids.

Gmjr will trade for another top 6 winger

I dunno, from behind, questionable area of the rink, arms extend to add momentum… I think there was a strong case for a suspension for the boarding

Also saw a report (I believe Molinari) that Maata remained hospitalized over night for observation but there is no longer concern about damage to internal organs.

It was probably the most complete effort I have seen but it still wasnt great. They took the foot off the gas a bit after the 1st. I hope they move toward more 1st periods for 60 miins. Malkin is the man… he stepped up and took over after speaking loudly. Sid is one of my alltime favourite players but he has pissed me off for awhile. Last night we saw who the true leader of this team is

remember when crosby used to fly through the neutral zone and back the defense up and create scoring chances off the rush constantly? did that disappear from his game because he doesn’t do it anymore or is the neutral zone so clogged it has become impossible to do on a regular basis?

Malkin had one big game in a year. Let’s see him dominate next game too. One big game out of 50 previous mediocre games does not give you redemption.

So I other words you are convinced that after one great game you are crowning Malkin the king of the nhl and the good old days are back?

What I’m saying is that, Malkin, far and away, has been their most consistent player this year. And clearly the 2nd most important to where they are behind #29.

^This… too bad the green puke doesnt have the mental capacity to absorb anything… at all.

Points in 10 of 18, 16 points on the year and second on the team in goals? Stanch is wrong… you’re not retarded you are fucking retarded!

sorry zerofool, malkin is 33rd in the NHL in points. that’s underachieving as far as i’m concerned. there is no excuse for him to ever be out of the top 3.

Ya but he is about 150 places above the guy whose ball sac you usually use to wash your face. End of the day everyone is speaking on these things like its the individuals… not one player on this team is playing great so how do we pick and choose whose stats to bitch about? Malkin has been the best forward on average this year, Kessel has been productive but almost invisible a lot of nights and Sid has been terrible all but like 3 or 4 games. Point is you’re a fucking idiot

If your going to go about saying who is underachieving, call a spade a spade yoda, not only is sindy crosby underachieving here, but even a bigger disappointment fron the league standpoint. Biggest failure in the NHL thus far.

Well anyone curious about Boucher, he’s been released outright. So if there is a coaching change he can become a candidate. @Sz1909_Szemberg: Guy Boucher announced the other day that he will leave SC Bern after this season due to family issues, but he is now released outright.

I’m not advocating the hire just passing along information. And why do I get a thumbs down for posting that Boucher has been released from his contract?

LOL – I assure you the thumbs down didn’t come from me. I was just making a joke. EDIT – i gave you a thumbs up on both now!

D stop using Tomlin sayings in your articles. You know what isn’t above the line, your lack of pregame or articles in general.

Pouliot should not be the player called up, Clendening should be the player filling Maata spot which means the person coming up will be taking Clendening’s spot as the 7th D. Pouliot needs to be playing as much as possible to fix the holes in his game, not sitting in the press box playing once every 6-7 games.

Honestly, whoever they call up should take Scuderi’s spot as the 6th D.

Would should happen and what will happen are completely different things though. Clendenning should have taken Scuderi’s spot out of camp but we know how that worked out.

Anyone who listened to the post game interviews last night should have come away with a very clear picture of one of the major deep rooted problems in the organization, every time MJ praised Geno for either speaking up and being a leader or stepping up on the ice he had to include Crosby as well. As long as this organizations top priority is protecting Crosby’s reputation and brand they will never be able to truly make decisions that are best for the team.

I agree Jay and if he continues to play as he is, and they go through periods like they have this year. The fanbase won’t be as forgiving, and we may have a dying alive part two quote in the making. Sid has always been number 1, can he handle being number two?

Fact is crosby hasn’t been the same player since that hit. Sad reality.

Jay honest question: if crosby can’t handle playing slot instead of right half wall on power play, do you really believe he can handle #2

It isn’t even about making him #2 though mwall, in MJ’s post game last night he was praising Geno for speaking his mind and being a leader and then backing it up with his play on the ice but had to also acknowledge Sid as well, there was no reason to even mention Sid when he was giving Malkin his due praise but had to make sure he praised Sid as well so that Sid wouldn’t get offended. Honestly it was disgusting that Geno could even get a deserved moment of recognition for himself out of fear of upsetting Sid.

Everyone gets participation ribbons on the pens

Malkin wasn’t being a leader by speaking out of a confidential meeting. Have you ever heard a player doing that? That’s why it is a closed door meeting – it’s confidential! Malkin probably played well because he knew he was in trouble with the other players for breaking confidentiality, and mgmt for being a “dork”! MJ kept mentioning Crosby because he played every bit as good, or better, just didn’t have anything go in for him, which has often been the case this year – they call it a “slump”. Listen to the comments by other team players and coaches!

Now he may take a vacation . Disappear again.

Sid has been missing since last December. Where’s the APB?