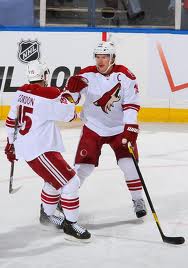 LATEST PENGUINS TRADE DEADLINE BUZZ
In the past week, the Pittsburgh Penguins and Tampa Bay Lightning have held preliminary talks surrounding a possible young player for young player “hockey trade”, sources tell Inside Pittsburgh Sports.com
The two players at the forefront of discussions have been a Dustin Jeffrey for Tom Pyatt swap. Pyatt, 26, has 6 goals and 11 points on the season and a +1 rating. He’s a bottom line forward with good speed and is a defensive minded player.
Pyatt is signed through the 2013-2014 season with a cap hit of $600,000.
Jeffrey is a player who some teams feel still has the upside of a top-9 forward and has drawn interest from a few teams including the Coyotes, Lightning and Sabres. Jeffrey continues to struggle to find a role in the lineup as the Penguins coaching staff is said to feel he isn’t good enough for a top-6 role and not gritty enough for a regular bottom line forward role.
Jeffrey, though, thinks the game well, has good intangibles, and is still at a young age where teams still see some upside. What the Penguins are at least intrigued about is getting a player for Jeffrey who would have an identified role, which Pyatt would have in the Penguins lineup and term still on his contract.
Jeffrey’s reps at CAA Sports would be thrilled to see Jeffrey getting another opportunity elsewhere, as they don’t feel the coaching staff believes in Jeffrey, but it’s not clear if talks between the Penguins and Lightning will go beyond the exploratory stage. Pittsburgh had three scouts in attendance for the Lightning – Devils game on Friday night.
Pittsburgh previously had interest in Nate Thompson but Thompson is now off the market after signing a four year extension last week.
Sources said last month that the Penguins held a 3rd round grade on Jeffrey and with Crosby’s injury, the Penguins will likely only move Jeffrey for another forward in return.
MORE BUZZ
Unless the Ottawa Senators were to suddenly show interest in moving Sergei Gonchar, the Penguins won’t be in the market for another top-6 defenseman despite Paul Martin’s injury. The Penguins are also showing no need to find insurance for Sidney Crosby, despite the uncertainty of how he recovers from a broken jaw.
All of the Penguins focus remains on a bottom line forward, preferably a 4th line center. Pyatt is among the Penguins targets, but another frequent name to surface is Phoenix Coyotes centerman Boyd Gordon.
Gordon, 29, is a UFA at seasons end and the Penguins know him well dating back to his time with the Washington Capitals. Gordon has 2 goals and 10 points on the season and is 58.5% in the faceoff circle. He had 8 goals last season. Gordon would be a very good fit but the Coyotes have been seeking a second or third round pick for Gordon. The price would have to be right.
The Penguins and Coyotes have been linked in recent weeks. GM Don Maloney has made two scouting trips to Pittsburgh, with his sights said to be on Jeffrey as a possible fit.
Other 4th line centers on the market include a trio of older centermen in St. Louis Blues center Scott Nichol, Buffalo’s Jochen Hecht, and Michal Handzus of the San Jose Sharks. Shero has had interest in Nichol in the past but Nichol is now 38 years old. Nichol, though, still gets it done in the faceoff circle, winning 62.1% of draws this season.
Do any make sense? I’d say no and as one scout told me today, the Penguins have a good 4th line center already in Joe Vitale.