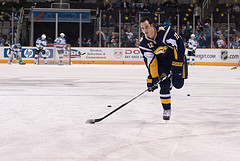 While the Penguins have looked into ways to clearing salary and wait to receive word from their top two targets Rob Scuderi, Ruslan Fedotenko, the organization is taking a patient approach into free agency thus far.
A conservative approach is the best way to describe the Penguins game plan in free agency as the Penguins have limited cap space to be very active.
Although the Penguins are waiting on Scuderi and Fedotenko to make decisions, the team is looking into a few wingers and defensemen as their backup plans.
Two wingers the team inquired about on Wednesday are
Ales Kotalik and Alexei Kovalev. Pittsburgh reached out to Kotalik’s camp to express their interest and as any GM would do, Shero did speak to Scott Greenspun the agent for Alexei Kovalev late Wednesday evening.
Right now the numbers won’t work and at this point Kovalev does not seem to be a realistic possibility, despite the fact that his value is not at the $4 million price range, his agent expected it to be.
Kotalik remains a distinct possibility but Pittsburgh may have to move quick. He is drawing interest around the league and if the Penguins continue to wait it out for Fedotenko, Kotalik could be off the board.
The Penguins also made a minor inquiry into Taylor Pyatt. Has 17-20 goal potential and is a player Pittsburgh pursued for a trade a few years ago.
Despite have internal discussions about Todd Bertuzzi, the team did not reach out to Bertuzzi’s camp on Wednesday according to team officials. They may do so on Thursday though.
Petr Sykora returning to Pittsburgh appears to be murky but the team has discussed the parameters of a one year deal with Sykora. He is seeking two but there isn’t much interest in him league wide. He is still under consideration from the team and his camp hasn’t closed the door on Pittsburgh.
Pittsburgh made two offers today; One to Mike Knuble and another to Steve Sullivan. The team wasn’t even close to signing Sullivan. Knuble is believed to have thought it over but went with the two year deal.
As Pittsburgh waits for Rob Scuderi, they did reach out to Nick Boynton. Pittsburgh expects to nab a bargain 5th or 6th defenseman.
A few other names the team has been kicking the tires on in organizational discussions are Jay McKee, Adrian Aucoin and Greg De Vreis. All three players would have to be open to signing for under $2 million per season. They made significantly more last season.
Two other players getting some play are Martin Skoula and Karlis Skrastins.
One player not in the Penguins price range is Francois Beauchemen. There is talk he approached Pittsburgh but I can’t confirm it. He would have to take a 6 or 7 year deal worth $2 million per season. He is getting offers of $4 million.