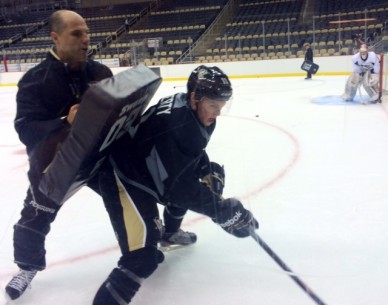 PENGUINS DEVELOPMENT CAMP 2014
PLAYER INTERVIEWS
By Dave Fryer, Contributor to InsidePittsburghSports.com
SAM LAFFERTY
Drafted 4th Round (113th overall), 2014
2013-14 Recap
Lafferty had 21 goals and 34 assists in 25 games at Deerfield Academy prep school in Massachusetts, where he played both center and right wing. His 55 points were an impressive improvement over the 24 points he had the year prior and gave him 95 points in 74 career games over 3 seasons at Deerfield.
2014-15 Outlook
Lafferty will play in the USHL for Tri-City for 1 season before attending Brown University in 2015-16. He will be a long-term project for the pro level, where his strong work ethic will likely make him an overachiever. He will need to improve his overall skills to add more offense to his two-way play and will need to add muscle mass to get more out of his tenacity.
2014 Development Camp Assessment
Lafferty was largely average all week, which is typical for a mid-round pick in his first development camp. His skills did not stand out much among the crop of forwards, but he also did not show any obvious weaknesses in those skills. His lean frame was more apparent when battling against the handful of larger, more-mature defensemen at the camp, but he did not shy away from engaging in battles for the puck. He drew extra media attention all week since he is a native of Hollidaysburg, PA, handling the spotlight quite well.
Post-Camp Interview
On his experience at Development Camp: “I’ve taken a lot away from this week. When I got drafted, it was sort of surreal. When I got here, I guess it sort of made the experience a lot more real and more grounded. It was just nice to see everything, get out on the ice, try to get better, and learn as much as possible.”
On what he saw from the inside about of this hometown team: “It’s definitely a top-notch organization. I had really high expectations, and they definitely exceeded all of those. It was an awesome week, for sure.”
On his penalty shot goal in the scrimmage game: “I just went down and… wanted to fake low blocker and shoot low glove. I kind of felt the backchecker’s stick at the end, but luckily it went in. It’s a good feeling. A little bit of luck involved, though. (Laughed)”
On the benefits of the week: “It’s definitely good to get here at my first Development Camp and just sort of get acquainted with things and get your feet wet. And then, just meeting with Billy Guerin and Fitzy [Tom Fitzgerald], getting a plan in place for things to work on. It’s a foundation that I can always turn to and just keep in mind as I go to Tri-City next year. I’ll just keep working and trying to get better.”
On his feedback from the Penguins staff over the course of the week: “There’s a list that we both put together. Each player does it. It’s a list of 7 or 8 things that are just reminders that we can always work on with our game. This week has been awesome; it’s been a blast.”