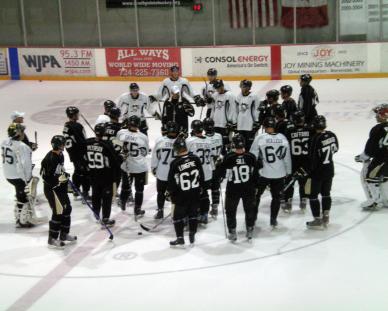 The Penguins prospects went through their second skating session this afternoon, which had a strong emphasis on instruction, attention to details as head coach Dan Bylsma ran the practice.
Scouting Report From Day 2
The players went through about an hour in a half session that was less uptempo than on Tuesday and focused on more instruction from the coaching the staff.
The session included a number of drills, including 2-on-1’s with a back-check, 5-on-0’s, hitting the “forward” in the slot for a shot and for about 30 minutes, defensemen and forwards were split up in separate groups.
*Eric Tangradi (2007, 2nd round) had an outstanding practice session. He was among the top players on the ice today.
Has great hands around the net and even though they were just skilled drills, you could get a glimpse of his top 6 potential in almost every drill today.
Tangradi showed a lot of composure during the 2-on-1’s and was not rushing his passes or shots.
*Nick Johnson (2004, 3rd round) had another good session. He has been a great 1-on-1 player in the sessions.
What has stood out for me with Johnson, is his quick release. You have to have that attribute to be a successful goal scorer in the national hockey league.
* Casey Pierro-Zabotel (2007, 3rd round) had a much better session today.
He was very good inside 15 feet of the goal, scoring a number of goals today.
Lacks top notch speed but is the kind of player who skates faster with the puck on his stick and that was evident today.
*Tangradi, Johnson and Keven Veilleux (2007, 2nd round pick) have been the top three forwards in camp thus far
Notes from 1-on-1’s and 2-on-1’s/back checker drill
*Simon Despres (2009, 1st round pick) has a ways to go in his development but through two days he has shown good positioning for a young player.
Closes in very well in 2-on-1 situations. Uses his long reach to his advantage and likes to get in front of pucks.
As for his offensive game, Despres struggles getting anything on his shot
*Alex Grant (2007, 4th round pick) struggles with his footwork. Needs a lot of when it comes to his lateral movement.
Nicholas Petersen (2009, 4th round pick) blew past Alex Grant with a nifty toe drag in one of the 1-on-1 situations.
Petersen, 20, has shown some offensive ability in camp. He had 37 goals – 53 assists – 90 points for Shawinigan of the Quebec Major Junior Hockey League.
*Luca Caputi performed very well in 2-on-1’s and 1-on-1 situations. He beat Brian Strait wide on one occasion using his size to fend off a Strait poke check.
It wasn’t another strong day for Brian Strait today in the 1-on-1 situations. He was beat by Luca Caputi, Nathan Moon and Jon Vitale.
Moon and Vitale each made pump fakes and slid the puck through Straits legs. Strait has been biting on pump fakes all week.
Something that will be easily fixed by the coaching staff.
*Ben Hanowski, 18, (2009, 3rd round pick) is a very good passer in tight. Like Despres, he has a ways to go in his development.
Very good puck skills—- Needs to improve skating and improve his strength over the next couple years
Hanowski will attend St. Cloud University this fall. Bright kid who knows what areas he must improve.
Line combinations today
Tangradi – Jeffrey – Johnson
Caputi – Vitale – Veilleux
Hanowski – Bathgate – Pierro-Zabotel
Petersen/ Sill – Moon – Longpre
The players will have a scavenger hunt this evening in the city and will return to the ice on Friday.
Plenty of more reports to be posted soon.