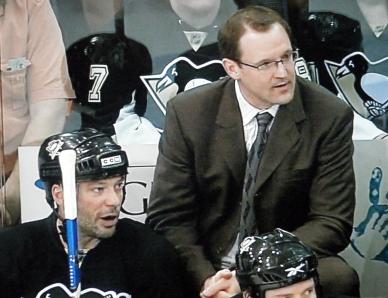 Executive vice president and general manager Ray Shero announced this morning prior to the Penguins practice, that the Pittsburgh Penguins have removed the ‚Äúinterim‚Äù tag from Dan Bylsma‚Äôs title and formally named him head coach on Tuesday.
The two sides agreed to a three year deal.
‚ÄúDan has done such an impressive job with our team, both on and off the ice, that we didn‚Äôt see the need to wait any longer to announce our decision,‚Äù said Ray Shero, the Penguins‚Äô executive vice president and general manager. ‚ÄúHe is the man we want to lead the Pittsburgh Penguins as our head coach.‚Äù
‚ÄúDan has impressed us all with his knowledge of the game, his relentless work ethic, his communication skills, and his ability to relate to the players and staff,‚Äù Shero said.
‚ÄúWhen Badger Bob Johnson was the coach of the Penguins, he said every day was a great day for hockey. Dan approaches the game with that same type of enthusiasm. He accepted the challenge of being our interim head coach in February and made this a very easy decision for our ownership and management.‚Äù
Photo courtesy of Inside Pittsburgh Sports