NHL: Penguins set to acquire Jussi Jokinen for a late round pick 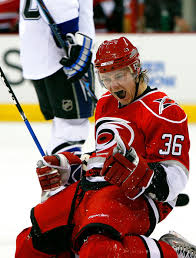 The Pittsburgh Penguins have acquired Carolina Hurricanes center Jussi Jokinen in-exchange for a conditional seventh round pick If Jokinen appears in 50% of the Penguins playoff games, the Hurricanes receive a sixth round pick.
Jokinen has one year left on his deal with a $3 million cap hit and the Hurricanes will be taking some of the salary cap hit back.
The centerman has 6 goals and 11 points on the season and a minus-8 rating. He is 59.4% in the faceoff circle and has some penalty killing abilities, averaging 1:25 of ice time shorthanded per game. Jokinen’s 24 takeaway’s were fifth on the Hurricanes.
Jokinen was placed on waivers last week and went unclaimed.
The 30 year old has 121 goals and 346 points in 569 career games. Jokinen had a career high 30 goals and 65 points in 2009-2010. His production dipped to 19 goals and 52 points in 2010-2011, and 12 goals and 46 points last season.
Jokinen can play center and wing.