Penguins sign goaltender Brent Johnson to a one year contract 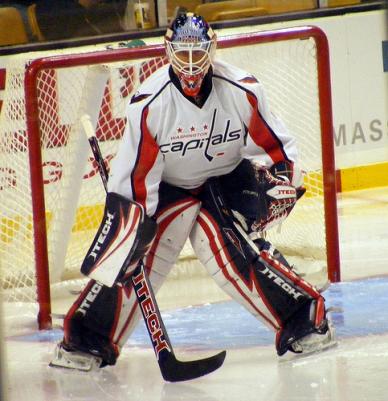 The Pittsburgh Penguins have signed goaltender Brent Johnson to a one year contract, the team announced this afternoon.
The deal is a one-way contract worth close to $530,000.
Johnson, 32, played 21 games with the Washington Capitals, finishing with a record of 12-6-2 during the 2008-09 season. The veteran goaltender recorded a .908 save percentage along with a 2.81 goals-against average
The Penguins have been actively seeking a veteran goaltender as the team made an offer to goaltender Curtis Sanford early in free agency but Sanford signed with the Canadiens on Monday.
The team also expressed an interest in Kevin Weekes but an offer was never made as Weekes was seeking a 1-way contract.
Johnson will likely battle John Curry in training camp, although the Penguins and Curry have not been unable to strike a deal on a new contract.
Curry’s camp claims the two sides are discussing many different concepts of a potential deal. A holdup is believed to be the fact that Curry would like a one-way contract.