Penguins trade deadline approach centers around not mortgaging the future 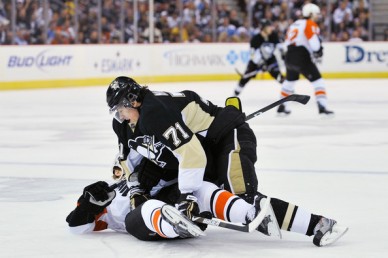 TRADE DEADLINE BUZZ
As of Wednesday evening, the Penguins were not close to any moves, as the Penguins trade deadline plans remain in the preliminary stages, following last week’s organizational meetings that centered around having no cap space.
Many are calling Ray Shero a dangerous GM with significant cap space available but this is a market with several teams eyeing impact forwards.
The trade market is begining to pick up with trades coming from Anaheim, Toronto, Florida and Chicago today, to name a few.
According to sources, what is known is that the Penguins will not mortgage the future and for now, there appears to be no change in the Penguins stance that Alex Goligoski remains off limits. Goligoski is seen by NHL insiders as a movable asset.
Untouchables among the Penguins prospects are said to be 2009 1st round pick Simon Despres and 2010 1st round pick Beau Bennett.
However, I’ve been told to keep in mind that the Penguins value top D-men/prospects Robert Bortuzzo and Philip Samuelsson extremely high and the Penguins would be hard pressed to move either player as part of a package to land scoring help.
Bortuzzo was among the Penguins group of untouchables last winter. Defenseman Brian Strait figures to draw significant interest from rival teams. He’s another prospect the Penguins are high on.
Even prior to his recent callup, league sources tell me the sense is Pittsburgh would consider moving Eric Tangradi this winter in the right deal. Just 21, the Penguins are not ready to give up on him but to no surprise, everyone’s not sold on him projecting to be a top-6 forward down the road.
The possibility of adding a high end winger with term left on their contract is not considered a “likely” option or route the Penguins aggressively explore. However, there are a few notable non-rental players who could be fits salary wise that the Penguins have had interest in, previously, like Toronto’s Kris Versteeg.
One source blatantly told me, Edmonton Oilers winger Ales Hemsky is not and will not be on the Penguins radar and there’s not a fit for several reasons. You can also scratch Dustin Penner off of your wishlist.
Even with the salary cap increasing, the Penguins don’t see it feasible to bring on $4+ million in salary for next season as the team expects Evgeni Malkin to be back by early next season.
The Penguins I’m told are approaching the deadline with the mindset that they will have a healthy Sidney Crosby.
I will touch base on some names out there the Penguins are said to be doing their due dillengence on in my next feature.