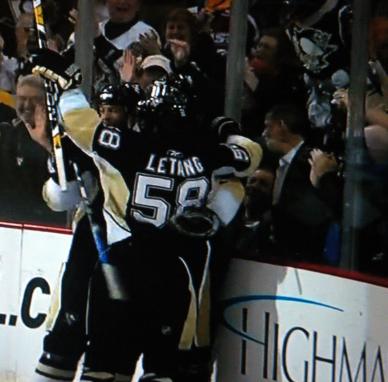 Evgeni Malkin fueled the Penguins 4-3 win Tuesday night scoring his 30th goal of season in the first period and scoring the clinching goal in the shootout. The win moved the Penguins to 6th place in the Eastern Conference and two points ahead of the New York Rangers who are currently 9th in the Eastern Conference.
After registering a season high¬†47 shots on goal against the Florida Panthers last Thursday night, the Penguins recorded 50 shots on goal against the Panthers Tuesday night. The Penguins held the Panthers to 21 shots.
Sidney Crosby extended his points streak to seven games (five goals, seven assists)
Can the Penguins compete with anybody in the East? That remains to be seen despite being 9-1-1 in their last 11 games as the Penguins are only two points from being out of the playoffs but most importantly the players in the locker room think they can. The confidence level of the team right now is at the point where they feel they can come back from any lead. There was no panic in dressing room following the 2nd period when the Penguins were down 3-1. Pittsburgh and Carolina are two teams in the Eastern Conference that nobody wants to play
Power Play woes continue
If the Penguins make the playoffs they likely won‚Äôt have a player who will have the kind of impact that Marian Hossa had last spring but they have the personnel to get the power play back to the point where they were near the end of last season. The power play was 0-6 Tuesday and it has to improve for this team to be a major factor this season.
The issue I see right now and this isn‚Äôt a knock on Sidney Crosby but the team is catering to him on the power play. For the majority of the time, Crosby is playing the top of the right side (left handed one-timer side), which has forced Evgeni Malkin to play the top left point which takes him off his one-timer side. Sidney Crosby is not a very good shooter and he should be playing down low where Gretzky made a living on the power play. Malkin is the Penguins top offensive player and the coaching staff has to find a position on the power play for Malkin that utilizes his strength as a shooter and that is on the right side where Crosby is currently playing.
Quick Notes
If Jordan Staal plays at the level he did against the Panthers with consistency the rest of the season, it is going to be a nightmare for teams to match up against the Penguins.
Petr Sykora is very one-dimensional but his presence is missed on that second line. Ruslan Fedotenko is a much different player when he is the first option.
Forward Pascal Dupuis has now gone 24 games without a goal. Management is somewhat dissapointed with Dupuis production this season. Many¬†thought he would be in the 15-16 goal¬†discussion getting top 6 forward minutes. Dupuis played a total of 9:44 against the Panthers. $1.4 million per season is way too much for a 4th liner/penalty killer.
Craig Adams had his best game in a Penguins uniform thus far. Head coach Dan Bylsma has shown a willingness to run four lines which will mean Eric Godard is not going to be in the lineup ( When everyone is healthy) down the stretch.
Allan Walsh the agent for Miroslav Satan met with Ray Shero on Monday to discuss the Penguins plans with Miroslav Satan.
The Penguins will practice at 11:30 a.m. on Wednesday