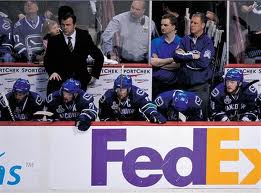 Post-Game Observations
*During the preseason the Penguins were technically sound and that continued into the first 25 to 30 minutes of last night’s season opener. The Penguins were aggressive and fast on the puck and really controlled the play for much of the first period.
The Penguins were impressive with their ability to push the play out of the gates, jumping out to a 2-0 lead on goals from James Neal and Matt Cooke.
Pens – Canucks Dan Bylsma Post-Game Audio
“The pace was high, ” head coach Dan Bylsma said afterwards as the game had a playoff feel to it at times.
Against a team like the Canucks, you have to avoid getting out of position defensively and that plagued the Penguins during the second half of the game as the Canucks battled back from a 3-1 deficit.
On Keith Ballard’s goal at 17:47 of the second period, Zbynek Michalek and Jordan Staal got mixed up on their reads (following the puck) as Michalek moved towards the puck carrier to take the center drive “player” leaving the entire left side of the ice for Ballard to break in all alone.
Michalek had a very poor game and was a team worst minus-3 in the game.
On the Canucks game tying goal, the Penguins again got caught following the puck as Paul Martiin and Mark Letestu both went towards Henrik Sedin in the corner, leaving the slot wide open as Sedin found brother Daniel wide open in front to tie the game at 3-3 at 7:51 of the third.
Pens – Canucks James Neal Post Game Audio
*James Neal played his best overall game since he became a Penguin. Getting that opening power play goal was big for him and I loved his aggressiveness and he played a Western Conference style of game that we haven’t seen from him since he was a Dallas Star.
Neal led the Penguins with 5 hits and the key for him is going to be able to bring that type of aggressiveness on a consistent basis. If he does, he will push for 25+ goals.
*Afterwards Head coach Dan Bylsma appeared pleased with the play of his top unit, Steve Sullivan – Evgeni Malkin and Neal.
“That line in particular was very dangerous in the offensive zone, ” Bylsma said.
Malkin appearing in his first regular season game since February 4, 2011 was okay on the night. The Sedins did a very good job against him and The Canucks did a solid job defensively of getting in Malkin’s face and giving him some whacks behind the play as he appeared frustrated at times.
What you want to see from Malkin this season is finishing plays and that’s something he hasn’t been able to do the last year in a half.
What stood out to me was the odd-man break in the third period around the 12:35 mark where Sullivan made a great feed to Malkin coming down the slot and it’s a play you would like see Malkin finish regularly this season. That puts the Penguins up 4-2 and likely closes out the game.
Malkin redeemed himself in the shootout.
*Matt Cooke scored twice and showed last night why the Penguins never gave much consideration to cutting ties with him. If Cooke keeps the mindset that he doesn’t have to deliver a big hit every shift and plays within the rules, he could be in line for a career season.
“I think you saw Matt Cooke play a pretty good game away from the puck. He was able to be physical a couple times, he blocked shots, penalty kill was effective and thats really where Matt Cooke is an effective player and can be a good player. Goals tonight are a bonus.”
Cooke’s shorthanded marker early in the second period was huge for the Penguins at the time as Fleury giving up a bad angle goal to Maxim Lapierre late in the first period changed momentum going into the second period
*Kris Letang had 2 assists and a +1 rating but he didn’t look comfortable defensively on the left side. I don’t agree with moving your best defenseman out of position to the opposite side, regardless of the situation.
*Working as the primary shutdown pair, Paul Martin and Zbynek Michalek had a tough time dealing with the Canucks top line of Sedin twins and Alex Burrows. Martin and Michalek were a combined minus-5 and the Sedin line dominated play for several instances in the game.
*Special teams was big in the game as the Penguins went 2-for-3 on the power play and 3-for-3 on the penalty kill. Dating back to last season, The Penguins two power play goals last night was the first time in 33 games (Including REG Season, Playoffs) they scored 2 or more power play goals in a game.
*The Penguins have won four straight road openers (VAN 2011, NJD 2011, NYI 2009, BOS 2008) and three of the four games have gone to a shootout, all Pittsburgh wins.
Player Notes & Stats
*Jordan Staal who was diagnosed by head coach Dan Bylsma with dehydration (no one’s buying that) was 12-for-21 (57.1%) in the face-off circle and added an assist with a strong effort. Staal is believed to be dealing with a previous injury (lower body) that has been nagging him this week.
*Joe Vitale was very strong in the forecheck and 4-for-7 (57.1%) in the face-off circle.
*Craig Adams (-2) and Arron Asham (-2) were a combined minus-4 in the game.
*Paul Martin (-2) logged a team-high 27:43 of ice-time and 2:49 of ice-time on the penalty kill.
*James Neal has 4 goals and 3 assists in 12 career games vs Vancouver.