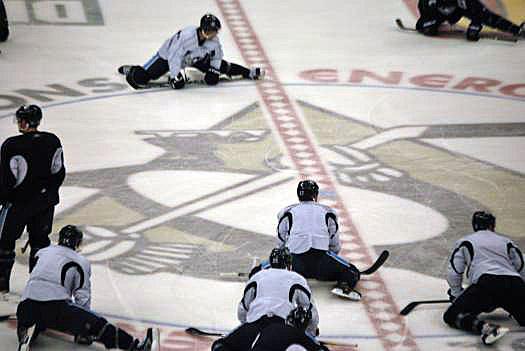 Morning Skate Report
The Pittsburgh Penguins enter Monday’s action tied for the most points in the NHL with 38 pts. The Penguins tonight host the floundering New Jersey Devils who own the second worst in the league at 8-16-2.
The big news of the morning is Billy Guerin announcing his reitrement this morning at the Consol Energy Center as a Penguin. Guerin who we first reported last month was going to announce his retirement after the Thanksgiving holiday, is expected to join the Penguins hockey operations staff in some capacity in the near future.
For the past 4 or so weeks, he has worked close to Tom Fitzgerald, going on scouting trips.
Guerin is here with his family and will have a presser around 10:30 a.m.
10:30 a.m. – Updates
Two players are missing from the morning skate.
Evgeni Malkin skated about an hour before the pre-game skate but has not joined his teammates. It looks like the staff will keep him out tonight. Malkin skated very well prior to the morning skate and was around afterwards. Nothing serious at all on his end.
Mike Comrie is also not skating.
Here were the lines
Kunitz – Crosby – Dupuis
Cooke – Talbot – Asham
Conner – Letestu – Kennedy
Rupp – Adams – Godard
Defensemen
Orpik – Letang
Martin – Michalek
Goligoski – Engelland
*There was some buzz that Brent Johnson would get the start tonight but Marc Andre Fleury was the first goaltender off and Fleury later confirmed that he is starting.