Pens lack creativity and skill in the playmaking, scoring areas 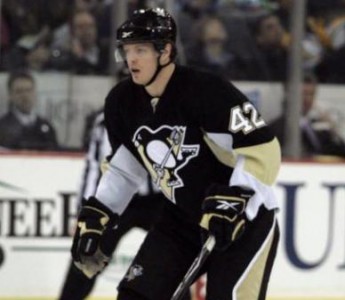 The Penguins are offensively challenged and the major issue with this team right now is that there’s no creativity due to the number of injuries.
“Take some of the past success we’ve had and some of the success we didn’t have tonight. Creating scoring opportunities by making certain types of plays, we have to avoid looking to that mindset, head coach Dan Bylsma said.
“Trying to make plays on the rush, back to our defensemen joining, we need to take the opportunity, get pucks to the net and create our offense there. Play in the offensive zone and create our chances there. We can clearly do that with the guys we have, team we have right now. We have not done that the last couple games, like we need to, ” Bylsma said.
Here’s another issue with this hockey club right now. There’s too many players who have no skill in the playmaking and scoring areas, most notably in around the net.
This is a team lacking skill and the likes of callups Eric Tangradi and Tim Wallace, although they might be goal scorers in the minors, they are nothing more than grinders with inadequate speed at this point in their development at the NHL level. They are not helping this club and don’t fit what the Penguins are lacking.
Although the Penguins have soured on Nick Johnson, it remains a mystery why the Penguins don’t give Johnson a shot at the NHL level. Johnson leads Wilkes Barre with 20 goals and most importantly, he could provide skill in the “skilled areas”.
He doesn’t have great speed but can create offensively, something Tangradi and Wallace just can’t do.
The Penguins are off tomorrow and it would be shocking if Tangradi isn’t sent down. He was expected to be scratched tonight, if it wasn’t for the Kunitz injury and he’s completely overmatched right now.
Another player the Penguins should consider calling up is Brett Sterling. Like Nick Johnson, he brings a skill element that the Penguins are desperately lacking right now.
Sterling has 18 goals on the season.