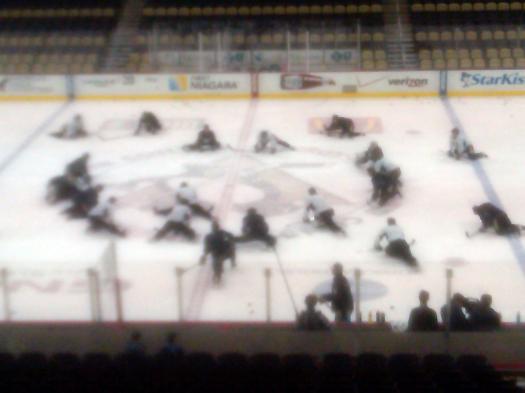 PITTSBURGH — Here’s update from Consol This Morning:
Jordan Staal and Brent Johnson both skated for about an hour before the Penguins morning skate, working with strength and conditioning coach Mike Kadar.
Johnson and Staal are now participating in the Penguins morning skate portion.
Johnson is alternating with John Curry at one end, while Jordan Staal is participating in all drills. Staal did not skate in the line rushes and will not play tonight but looks very strong on the ice.
Staal did work in as the primary penalty killer with Craig Adams against the Penguins No. 1 power play unit.
Based off the goaltender rotation, it looks like Curry will serve as tonight’s backup.
Pascal Dupuis and Eric Godard are not participating in the morning skate, while Tyler Kennedy left the ice after about 7 minutes and has not returned.
The Penguins opened up the skate with the following lines:
Kunitz – Crosby – Engelland
Cooke – Malkin – Talbot
Conner – Letestu – Kennedy (left ice early)
Rupp – Adams – Asham
DEFENSEMEN
Orpik – Letang
Martin – Michalek
Goligoski – Lovejoy
*Looks like based off the skate that Ben Lovejoy will get back into the lineup.
If there is an injury to Kennedy and Dupuis, the Penguins will be down a forward.