Pirates Buzz: The latest on Maholm, Dotel and Iwamura 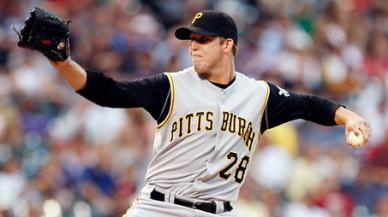 By John Perrotto
The Detroit Tigers and Philadelphia Phillies have joined the Los Angeles Dodgers in having interest in trading for Pirates left-hander Paul Maholm. However, it appears no deal is imminent.
The Tigers have backed off on their pursuit of pitching and instead are focusing on finding patches for a lineup that is suddenly decimated because of injuries to second baseman Carlos Guillen, third baseman Brandon Inge and right fielder Magglio Ordonez.
Meanwhile, the Phillies look at Maholm as their second fallback option in an attempt to acquire a starting pitcher that would help them beyond this season. The Phillies’ primary target is Arizona’s Dan Haren and they have also talked to Houston about Roy Oswalt.
The Pirates are driving a hard bargain. They will trade Maholm only if they can get back a young pitcher who can immediately join the major-league rotation and a frontline prospect.
The Pirates scouted Phillies left-hander J.A. Happ on Sunday as he started against Colorado at Philadelphia. It was Happ’s fist big-league start since April 15 and just his third of the season as he was on the disabled list until June 6 with a strained forearm then optioned to Class AAA Lehigh Valley.
Happ, 27, pitched five innings Sunday and allowed three runs and four hits with four walks and four strikeouts. He was 12-4 with a 2.93 ERA in 35 games, 23 starts, last season as the Phillies won their second straight National League pennant then made one start and six relief appearances in the postseason.
With the non-waiver trading deadline approaching at 4 p.m. on Saturday, the Pirates are said not to be heavily into talks with any teams.
Teams are interested in a number of relievers but the Pirates are telling them that would have to be overwhelmed to deal either one of their two primary right-handed set-up men, Joel Hanrahan and Evan Meek.
Closer Octavio Dotel is generating little interest as contenders see him as nothing more than a sixth-inning or seventh-inning pitcher in a good bullpen while left-hander Javier Lopez and right-hander D.J. Carrasco could be moved but will likely fetch no more than a second-tier prospect in a trade.
Meanwhile, San Diego has emerged as a potential suitor for second baseman Aki Iwamura, who was demoted to Class AAA Indianapolis last month.
The Padres are looking for help at the position as David Eckstein is on the disabled list with a strained calf. They also have an interest in Boston utility infielder Jed Lowrie.
XXX
John Perrotto is the editor-in-chief of BaseballProspectus.com and baseball columnist at the Beaver County Times.