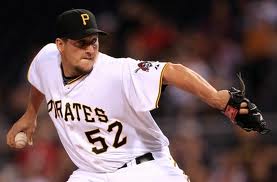 Pirates GM Neal Huntington has made it known to teams that closer Joel Hanrahan is available via trade this off-season, industry sources indicate.
Huntington and the Pirates intend to go into the Winter Meetings with an open mind regarding the possibility of moving Hanrahan.
Hanrahan, 30, had an outstanding 2011, posting 40 saves with a 1.83 ERA in 68 2/3 innings pitched.
Despite a strong closer market in free agency, Hanrahan is enticing to potential contenders. He made $1.4 million in 2011 and is arbitration eligible and only projects to make $3.5 to $4 million in 2012.
The Pirates, as expected, have a high price tag for Hanrahan and are looking for immediate help at the major league level in any deal for the 30 year old closer.
The Texas Rangers had been among 2-3 teams to check in on Hanrahan’s availability but the Rangers decided to go the free agent route and were not actively involved in talks for Hanrahan.
The Pirates though expect any serious suitors to emerge next week. Evaluators believe the Toronto Blue Jays could emerge as a possible suitor and are viewed as a match for the Pirates and a team that is believed to have some interest in Hanrahan.
Toronto is willing to move two players the Pirates are high on, prospect 1B David Cooper and pitcher Kyle Drabek. Jon Heyman of SI.com, reports that the Blue Jays will listen to offers for Cooper who is stuck behind Adam Lind at first base.
Cooper, 24, hit .364 with 9 home runs – 96 RBI’s for Triple-A Las Vegas last season. Cooper the Blue Jays 1st round pick in 2008, appeared in 27 games for Toronto last season, batting .211 with 2 home runs and 12 RBI’s.
The Pirates to this point have been lukewarm about a long-term deal for Hanrahan. Huntington is not a believer in paying big moneyÂ to relievers.

ESPN’s Keith LawÂ created some buzz this afternoon reporting that Andrew McCutchen is not untouchable and the Pirates are willing to listen on him.
This falls in line with Neal Huntington’s philosophy of listening to trade inquires on any player. However, unlike Hanrahan, the Pirates are not serious about moving McCutchen, nor do they believe any offer they couldn’t turn down will come their way.
The odds of the 25 year old McCutchen being traded is less than 1 percent.
Tidbits
— Pirates GM Neal Huntington expects to meet with Derrek Lee’s agent Casey Close next week, the Pirates GM says. Talks between the two sides have been on-going but “slow”.
Close also represents first baseman Casey Kotchman who the Pirates have expressed preliminary interest in.
— Don’t be surprised if the Pirates look into Astros left hander Wandy Rodriguez in the coming months, who the team inquired about last July. The soon to be 33 year old is due $10 million in 2012 and $13 million in 2012. He is believed to be out of the Pirates price range but the team is expected to make an inquiry once again when the Astros formulate an off-season plan now that new ownership is in place. Teams hope the Astros asking price will be lower than it was during the summer under former GM Ed Wade. Any inquiry will pretty much just be the Pirates covering their bases.
— The Pittsburgh Post-Gazette reports that the Pirates are showing early interest in Colorado Rockies right hander Aaron Cook. Cook, 32, is the Rockies franchise leader in wins with 72 and played under Clint Hurdle, having his best season in 2008 when he went 16-9 with a 3.96 ERA, making the NL All-Star team.
Cook though has had the look of a pitcher on the downside of his career the past couple season. Cook went 3-10 with a 6.03 ERA in 97 innings pitched in 2011 and posted a 5.08 ERA in 2010 going 6-8.
Cook is 72-68 in his career with a 4.53 ERA. The Rockies declined an $11 million option on Cook making him a free agent. Cook is not viewed as a starter by many teams, one scout says. Cook’s injuries of late have included a right fibula fracture, shoulder issues and a broken ring finger.ï»¿
Pitchers higher on the Pirates wishlist include Chris Capuano, Jeff Francis and Hisashi Iwakuma.
— The agent for Paul Maholm is confident that Maholm will land a multi-year contract (likely 2 years) in the $7 to $8 million per season range based on interest and talksÂ so far.