Pirates Weekly Report: Huntington starting to develop a plan for the future? 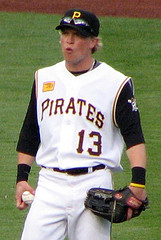 5/31 – 6/7 (Record: 3-4)
The Trade of Nate McLouth showed Pirates fans and Major League Baseball that Pirates GM Neal Huntington is a risk taker.
The trade sent shockwaves through the Pirates fan base and the reception of the trade has been aboout 90% negative.
Huntington knew the trade of McLouth wouldn’t go over easy with fans but whether you agree with the trade or not, at least Huntington is starting to develop a model of how he wants to construct his team in the future.
Buster Olney reported this week that he heard the Pirates were concerned about Nate McLouth’s defensive abilities, so they moved him now before his trade value diminished.
Based on Neal Huntington’s comments that appears to be the truth and despite winning a gold glove in 2008, many scouts felt McLouth was the most over-rated center fielder (defensively) in the game.
Looking to acquire power arms and moving towards a speed lineup, Huntington has developed a plan, where he wants to have the adequate personnel to be aggressive on the basepads and win by playing small ball in the future.
The 1-2 combo of Andrew McCutchen and Nyjer Morgan at the top of the lineup is a glimpse of the future.
The Pirates scouting staff is thrilled that they were able to land OF Gorky’s Hernandez who is an Andrew McCutchen clone with less power.
Piece by piece Huntington is beginning to restock the farm system as the Pirates look at the Minnesota Twins as an example of how they want to construct their team; with power arms and speed.
I did not have a problem with the Pirates moving Nate McLouth at some point this season. His value may never be higher but the return the Pirates got is a bit questionable.
Still, it does appear for the first time in years that Huntington has a plan unlike David Littlefield.
The days of the Pirates filling starting spots with stop gap veterans or over the hill veterans looking for one more contract, are a thing of the past and won’t be the norm under Neal Huntington.
Whether Huntington’s plan ends the days of the Pirates being a laughing stock remains to be seen.
To be successful, Huntington will need a lot of luck and a commitment from ownership to put millions into the draft, year after year and increase the payroll to the $65 – $70 million range, where small market teams can be successful like the Brewers are. —Whether the payroll ever hits $70 million in the next 5 years is very much in doubt with Bob Nutting at the helm.
Restocking the system and building through the draft is Huntington’s only hope of getting the franchise back to respectability.
Huntington has made minor strides in those categories but at some point he will need a stronger commitment from ownership, if his plan is going to succeed.
Trade Winds
Going into true rebuilding mode is a major part of Neal Huntington’s plan as he is actively shopping veterans Jack Wilson, Adam Laroche, John Grabow, and Freddy Sanchez.
Regarding Jack Wilson who is having trouble staying healthy, the Pirates have held discussions with two teams, the
Boston Red Sox and the Kansas City Royals. A decent return for Jack Wilson is in doubt and this will clearly be a salary dump.
The Problem the Pirates are having right now is that Kansas City wants Pittsburgh to eat half of Wilson’s salary and even the Boston Red Sox want to the Pirates to eat some of Wilson’s salary.
The Pirates have had a lot of difficulty trying to move Wilson the past two seasons and this year is going to be no different.
The New York Mets have been kicking the tires on Adam Laroche.
Recent comments from Laroche, calling Mets center fielder Carlos Beltran“classless” this week will cool down any Laroche to the Mets rumors.
The Texas Rangers have been scouting the Pirates over the course of the past two weeks. It’s believed they have their eye on reliever John Grabow.
Player of the week – CF Andrew McCutchen
.333 avg – 4 RBI’s – 1SB – 1BB – 3R – 1SO ( 6 hits in 18 AB)
Andrew McCutchen has looked really good since being called up Wednesday night following the Nate McLouth trade
He’s had a couple of bad at bats and made a bad read today on a ball but on the whole, he doesn’t look intimidated by any means.
From PR standpoint, the Pirates have to be thrilled.