Post-Game Buzz: Pens beat Senators 3-1; What Glass being phased out on PK could mean for playoff lineup & more buzz 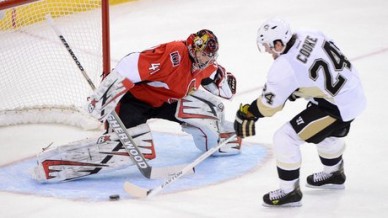 Jarome Iginla (13) and Dustin Jeffrey (3) scored first period goals and Tomas Vokoun made 34 saves, leading the Pittsburgh Penguins (35-10-0, 70 pts) to a 3-1 win over the Ottawa Senators (23-16-6, 52 pts) on Monday night at Scotiabank Place.
Tyler Kennedy (6) added an insurance goal with 2:34 left in the game to seal the win.
Vokoun with the win earned his 300th career victory (28th goaltender in NHL history), while Penguins head coach Dan Bylsma earned his 200th career win in just 316 NHL games, the fastest coach in NHL history to reach that milestone.
The Penguins earning their 7th straight win and 22nd out of 24 games, did so without an All-Star cast of players. The long list included:
Kris Letang
Evgeni Malkin
Marc Andre Fleury
Sidney Crosby
James Neal
Beau Bennett
Mark Eaton
Joe Vitale
The Penguins win increases the chances of the Penguins and Senators meeting in the first round of the playoffs in a 1-8 matchup. Ottawa’s loss is a tough one as the Winnipeg Jets won to pull within one point of the Rangers and Senators who each have 52 points.
A Senators – Penguins first round matchup would be an extremely favorable one in the Penguins direction.
PLAYER NOTES
*On Matt Cooke’s first shift the Senators made a point to go after him as Chris Neil tried to get Cooke to drop the gloves and moments later Cooke drew a penalty. Cooke played very well then setup Tyler Kennedy for a third period goal with 2:34 left in the game, as Cooke got in on the forecheck and won a puck battle down low, setting Kennedy up in front for the goal.
*Brenden Morrow’s resurgence continues. The veteran winger had 2 assists giving him 5 goals and 6 assists in 12 games as a Penguin.
*Jarome Iginla notched his 13th goal of the season and has goals in three consecutive games.
*Pascal Dupuis had an assist and was a +1 in the win. Dupuis leads the NHL with a +31 rating.
*Craig Adams led the Penguins with 7 hits in 13:22 of ice time.
*Tomas Vokoun is 10-1 in his last 11 games.
*Dustin Jeffrey’s Stat line tonight: Goal, Assist, +2, 9FW – 3 FL (75%)
LATEST PENGUINS BUZZ
(1) Tomas Vokoun’s play over the last five weeks puts even more pressure on goaltender Marc Andre Fleury this post-season. With expectations so high, it’s hard to imagine Fleury not having a short hook in the playoffs and Vokoun has installed the confidence in the coaching staff where Bylsma won’t think twice about pulling Fleury were his post-season woes to continue.
(2) What implications does Tanner Glass being phased out on the penalty kill have on the Penguins potential playoff lineup?
It increases the odds of Tyler Kennedy, Beau Bennett, or Joe Vitale playing over Glass when this group is fully healthy. The sense in Penguins circles has been that when this group is fully healthy, 11 of the 12 forward spots would be taken up by Kunitz, Crosby, Dupuis, Iginla, Malkin, Neal, Morrow, Sutter, Cooke, Adams and Jokinen with the 12th spot likely coming down to Glass or Kennedy.
Beau Bennett has had something to say about that, proving he deserves to be among the Penguins top-12 forwards when everyone is healthy, and Glass seeing less and less minutes on the penalty kill with Chris Kunitz and Jussi Jokinen seeing increased penalty kill minutes over the last couple games isn’t by accident.
The grit the Penguins have added in Morrow, Iginla and Murray has eased the need for Glass in the lineup (when this group is healthy) and the Penguins phasing Glass out on the penalty kill doesn’t bode well for him with Malkin and Neal entering the lineup for the playoffs.
Glass came into today’s game 5th among Penguins forwards in penalty kill ice time per game at 1:22 and he had just 37 seconds on the PK vs Bruins Saturday afternoon and just 25 seconds tonight vs the Senators. By comparison Chris Kunitz – 1:19 of ice time shorthanded vs Bruins and 1:44 of ice time shorthanded tonight vs Senators. Same story for Jussi Jokinen past two games: 56 seconds of ice time shorthanded vs Bruins and 1:25 of ice time shorthanded vs the Senators.
(3) Despite his goal tonight, one thing that’s been concerning with Tyler Kennedy been the lack of intensity he seems to be playing with on a game by game basis. I see no urgency in his game and he plays like a player who feels his spot in the lineup is safe. That said, maybe it is as I don’t hear there’s a lot of frustrations with his play inside the organization and one thing to keep in mind is that the Penguins are comfortable with Kennedy as he’s been a regular in the lineup, playing mostly a top-9 role in the organization since 2007-2008.