Post-Game Buzz: Steelers struggle to finish plays, as offense is limited to 13 points in win 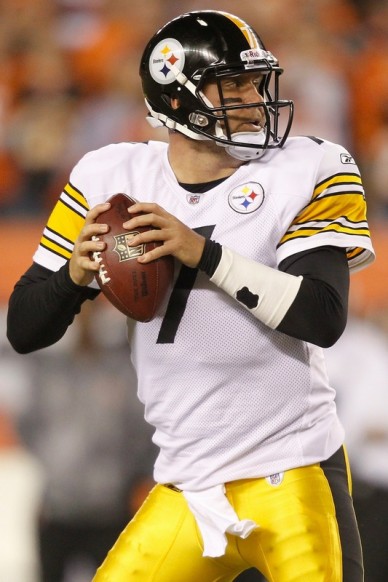 The Pittsburgh Steelers heavy favorites vs the Kansas City Chiefs Sunday night, had yet another nail biter against an inferior team.
It was a game that resembled Pittsburgh’s week 3 win vs the Indianapolis Colts where afterwards you’re thinking to yourself that if the opposition had an adequete quarterback, the Steelers would have been on the losing side.
That might have happened tonight if Tyler Palko wasn’t the quarterback, althoughÂ Palko made some plays in the second half, leading the Chiefs down the field before throwing his 3rd interception of the game at the Pittsburgh 14 with 28 seconds remaining.
Keenan Lewis sealed the win for the Steelers with the interception on a ball intended for Dwayne Bowe who didn’t even make an attempt at getting his hands on the pass as Pittsburgh prevailed 13-9, improving to 8-3 on the season.
Palko had four turnovers in the game and probably shouldn’t be a backup quarterback in the NFL.

— There will surely be a lot of bashing coming the Steelers way from fans and such, but there’s really no reason to panic at this point.
The Steelers disappointing effort offensively can be pinpointed to a lack of execution. They left a ton of plays out there, most notably early on.
A Mewelde Moore fumbleÂ at the 2 yard lineÂ on the Steelers opening drive stands out but so does an easy drop pass by Mike Wallace in the end zone who might have had his worst game since his rookie season.

Wallace drop in the end zone was a turning point in the game and Wallace was unable to come up with makeable catches for most of the night. The Steelers offense which was looking to take off coming out of the bye week, just didn’t finish plays.
Pittsburgh was 1-for-3 in the redzone and their woes were highlighted by the Moore fumble and the Wallace drop.
Wallace had 2 receptions for 17 yards, the first time in 31 regular season games that he recorded 20 receiving yards or less in a game. The last time Wallace had under 20 receiving yards was on December 10, 2009 against the Cleveland Browns.
— The Steelers against Cincinnati had a good tempo with their wide receiver formations, using Wallace, Antonio Brown and Jerricho Cotchery as the top-3 with not much mix and matching.
Tonight something was off as offensive coordinator Bruce Arians tried to get everyone enough snaps with Emmanuel Sanders returning.
Hines Ward’s role was a top storyline coming into the game and Ward was involved early on, taking 9 of the team’s first 19 snaps and 10 overall in the first half. However, his role decreased as the game progressed. Ward though was the No. 4 receiver in tonight’s game plan asÂ Cotchery had under 10 snaps.
Ward had 4 receptions for 21 yards in the win.
— Ben Roethlisberger’s fractured right thumb did not hinder his throwing ability much or the Steelers going away from the pass. The Steelers came out of the gates on their opening drive throwing on 6 of 8 plays.
Overall in the game, Roethlisberger went 21 of 31 for 193 yards with 1 touchdown and 1 interception. The Chiefs limited Roethlisberger to 6.2 yards per pass. Roethlisberger’s night was highlighted by aÂ touchdown pass to Wesyle Saunders that was vintage Roethlisberger and Saunders made a great grab. The Steelers love Saunders upside.

— The Chiefs came into the game allowing an average of 153.0 yardsÂ on the groundÂ their past five games. Rashard Mendenhall ran hard and had some nice runs but only averaged 3.4 yards per rush, gaining 57 yards on 17 carries.
— Tyler Palko wasn’t afraid to attack Ike Taylor through the air. On the Chiefs opening drive, Palko connected with Dwayne Bowe for a 25 yard strike with coverage by Taylor. In the 4th quarter, on a 3rd and 6, Jonathan Baldwin beat Taylor for a 20 yard gain and on a 3rd and 4 on the Chiefs game ending drive, Baldwin hauled in a 6 yard reception for a first down against Taylor.

*Pittsburgh outgained Kansas City 290 to 252 —
*Pittsburgh had 6 penalties for 50 yards —
*The Steelers had a 51 to 49% pass to run ratio —
*Antonio Brown led the Steelers with 81 receiving yards on 4 catches. In his last five games, Brown has 30 receptions for 445 yards. By comparison Mike Wallace has 327 receiving yards on 22 receptions during that span —
*Pittsburgh had 4 takeaways in the victory, including 3 interceptions, giving them 10 takeways on the season. They came into the game with just 6 takeaways —
*Ryan Mundy who filled in for Troy Polamalu, led the Steelers with 11 tackels and had 1 interception —
*Emmanuel Sanders had 2 receptions for 25 yards in his first game since October 30th. Sanders also worked as the Steelers primary kick returner and was not very effective. He averaged 19.3 yards on four kick returns —

Steelers head coach Mike Tomlin confirmed that Troy Polamalu had concussion like symptoms and that the team erred on the side of caution which is why Polamalu was not allowed back in the game……The Steelers are optimistic about LaMarr Woodley returning to the lineup next Sunday vs Cincinnati. Tomlin called him “close to returning” after the game….Maurkice Pouncey left the game with a virus……