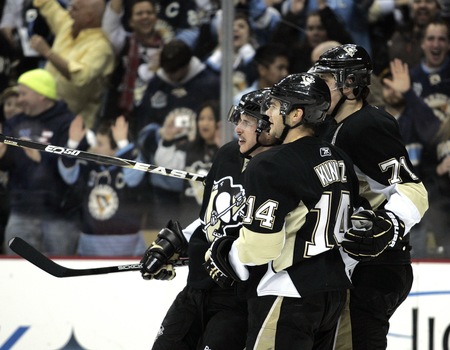 The Pittsburgh Penguins for the second straight game starting off sluggish in the first period as Evander Kane scored just 47 seconds to give the Thrashers a 1-0 lead.
Atlanta pushed the play offensively early on and had the Penguins on the ropes through the first 10 minutes of game as the Penguins were caught running around the defensive zone.
Although this morning Dan Bylsma downplayed Sidney Crosby being the player who plays the biggest factor in Pittsburgh getting off to quick starts, calling it a team effort in so many words, it was Crosby who rescued the Penguins in the first period tonight.
Crosby twice answered Thrashers goals by scoring in the first period, netting goals 31 and 32, and extending his points streak to 25 games. Crosby would add two helpers in the third period to cap off a 4 point night (2G-2A) but it was his play in the first period that jump started the Penguins who would go on to dominate the final 40 minutes of play.
“Some credit goes to Atlanta, ” Bylsma said in the Thrashers getting off to a quick stat.. “We talked before the game about speed of their team and work ethic of their team…. They certainly showed us that right off the hop. They had a number of chances that they had going at our net and got results because of it. But we didn’t manage the puck well enough and we didn’t get pucks behind their D the way we need to to play our game. The good part is we adjusted and….
came out in the second period and played a much better second period. I think the shots were 9-1 at one point in the second before we got in a little bit of penalty trouble but we responded and again in the third we came out right off the hop, we go north and execute and get a great goal to go 4-2.”
The Penguins dictated the play in the second period and got a big goal from Craig Adams at the 11:38 mark of the second period, scoring short-handed to give Pittsburgh a 3-2 lead.
Adams buried a great feed from Matt Cooke who won a puck battle behind the net from Dustin Byfuglien and got it in front to Adams who one-timered it past Ondrej Pavelec for the goal.
Pittsburgh has 7 shorthanded goals on the season and the team came up big on the penalty kill in the win, killing off 7-of-8 penalties. Cooke had an excellent game, earning the games No. 2 star with a goal and assist along with strong play along the boards.
On the PK, Pittsburgh made one mistake on Dustin Byfuglien’s power play tally at the 15:18 mark of the first period, where Craig Adams got caught down low and Max Talbot was cheating to the Thrashers left pointmen, leading Byfuglien wide open who fired a slap shot past Marc Andre Fleury for his 14th goal of the season.
As Bylsma noted in his post-game comments, the Penguins responded extremely well.
Leading 3-2, Pittsburgh opened the third period with the fastest third period goal in team history. Pittsburgh won a faceoff to start the period and Crosby carried the puck into the Atlanta zone where he found Chris Kunitz in front for his 10th goal of the season. According to Stats LLC, the fastest goal in Penguins history to start a third period was 11 seconds by Martin Straka on Oct. 18, 2003.
The Penguins PK unit then stepped up again in the third period, killing off a 5-3 penalty just minutes into the period, which sealed Atlanta’s fate and the Penguins put the game away on an highlight reel goal from Mark Letestu who made a great one-on-one play for his 8th goal of the season.
Sidney Crosby would then get back into action and appeared to have recorded his 8th career hat trick on a slap shot from the point but Cooke redirected Crosby’s shot from just inside the blue line late in the third for his 8th goal of the season.
The assist gave Crosby a four point night and during his 25 games points streak, Crosby has collected 26 goals, 24 assists, +21 rating and has recorded 16 multi-point games during his streak.
The Penguins are 19-5-1 during the streak as Crosby continues to put up Lemieux like numbers.
Crosby had a Lemieux like goal on his second goal of the game and 32nd of the season as he took Alex Goligoski’s lead pass, then split two defenders (Sopel, Hainsey) before lifting a shot past Ondrej Pavelec and under the crossbar.
“It’s nice when your going well and the pucks going in, ” Crosby said.
Crosby enters Wednesday’s action with 32 goals and 33 assists for 65 points in just 38 games.
Goaltender Marc-Andre Fleury stopped 31 of 34 shots to earn his 17th win of the season.
Atlanta’s Pavelec, 0-7 in his career against Pittsburgh, gave up goals on six of 36 shots.
NOTES
Pittsburgh scratched goaltender Brent Johnson (groin), Deryk Engelland (healthy) and Eric Godard (healthy). Pittsburgh is 9-1 against Southeast Division teams.