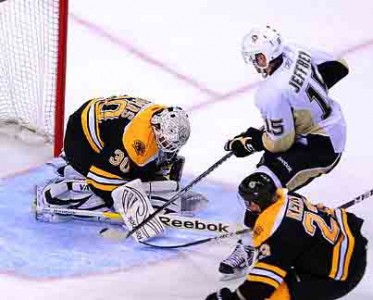 Hard work for the Penguins continues to keep them in striking distance for the top seed in the Eastern Conference and the division lead.
“When you work hard you get rewarded,” Boston coach Claude Julien said of the Penguins. “They got a break and got the puck in the net.”
Pittsburgh got a crucial win Saturday night, defeating the Boston Bruins 3-2 in overtime on a great individual play from Dustin Jeffrey who netted the game winner 1:52 into overtime, intercepting the puck in the neutral zone and beating a flat footed Bruins defender to the net for the goal.
Boston’s seven game winning streak came to an end on home ice.
Jeffrey netted two goals in the win and Jordan Staal (7) also scored for Pittsburgh. Marc Andre Fleury made 29 saves to record his 29th win of the season.
“We’ve been battling hard in games and maybe not getting the two points and coming out on the back end on some overtimes,” Penguins coach Dan Bylsma said. “Tonight, getting down early in the game and responding right away with the goal … and then to keep going and get the lead.”
The Penguins moved two points behind Eastern Conference and division leading Philadelphia. The schedule sets up favorable for the Penguins over the next four games, with three straight home games and a road game next Tuesday in Ottawa.
Pittsburgh was again without Sidney Crosby, who missed his 26th game with a concussion, but Fleury kept the Penguins in it early. Boston outshot Pittsburgh 7-2 early, getting a few good scoring chances.
“As we’ve said all year, we have a standard of the way we want to play,” forward Matt Cooke said. “It doesn’t matter if it’s Sid and Geno [Evgeni Malkin] or it’s [Craig Adams] and Dusty [Jeffrey], we want to play that way. We want to model our team around a certain standard, and we’ve done that successfully. That’s our focus.”
David Krejci got the Bruins even at 2 when he scored with 33 seconds left in regulation while Boston goalie Tim Thomas was pulled for an extra skater.
Zdeno Chara had the other goal for Boston, which was on its longest winning streak since a 10-game run from Dec. 12, 2008, to Jan. 1, 2009.
Thomas got the start over Tuuka Rask and finished with 37 saves but was beaten for the winning goal when Jeffrey broke in alone, after he stole a pass from defenseman Dennis Seidenberg and beating Thomas for the game winner. Jeffrey showed great acceleration on the goal and both of his goals were “goal scorers” type of goals for the 22 year old rookie.
Jeffrey has seven goals in 18 games this season and is making his mark as a regular on the team.
Newcomer James Neal remains scoreless in six games with Pittsburgh but played his best game in a Penguins uniform last night. He was very aggressive on the forecheck and making things happen on a consistent basis.
Just a day after having over 35 minutes of ice time, Paul Martin logged a team-high 28:36 of ice time in last night’s win.
Tyler Kennedy set up Jordan Staal for his second period marker with a great dish on a 2-on-1, collecting an assist on the play and his 11th point in his last 15 games.
The Bruins and Penguins wrapped up their season series, as each team won twice in the oppositions building.
Pittsburgh is off today and will return to the ice on Monday for practice at the Consol Energy Center.