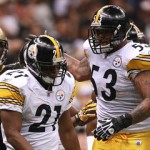 By Dale Grdnic
PITTSBURGH — The Pittsburgh Steelers went through a light workout Monday, and neither injured starter — quarterback Ben Roethlisberger, center Maurkice Pouncey or left defensive end Ziggy Hood — participated.
In fact, Roethlisberger and Pouncey weren’t even on the turf at the indoor complex. They stayed in the training room and rehabbed their sprained left ankles. Hood, who strained his right groin against the Cleveland Browns Thursday night, was in sweats but didn’t do much.
Steelers coach Mike Tomlin won’t update the players’ status until his Tuesday afternoon press conference, but most players interviewed Monday believed Roethlisberger — who was unavailable for comment — would play when the club plays at San Francisco Monday night.
Pouncey commented for himself and believed he was better off because this was his second left high-ankle sprain.
“That’s definitely true,” Pouncey said. “After the calcium and stuff breaks up in there it helps it heal better after you tweak it the first time. What I did to mine, it was terrible the first time. This one is not that bad, so I’m fine. I’m still day-to-day, and I’m still resting it, but I’m going to play.”
Pouncey was quickly reminded that he also said he was going to play in the Super Bowl, when in reality there was no chance despite two weeks off.
“I’m going to play, play this time,” Pouncey stressed. “That was different. It’s not as swelled up now, and I feel like I could do a little something on it now. But it just needs the right rest and the right rehab on it right now. (But) it’s a lot better than it was after the game. I wore a boot the first couple days on it, but not now.”
Pouncey was asked if he was going to buy a hyperbaric chamber like Hines Ward owns and spend time in it to enhance the healing process.
“I might sneak into his house tonight and sleep in his, but I don’t have the money to get one of those for myself,” Pouncey said. He also was asked if he believed that Roethlisberger would play Monday night at San Francisco. 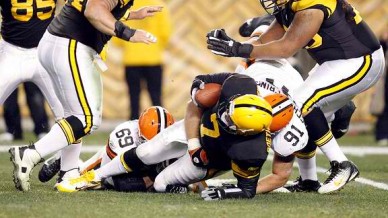 “We’re both fine,” Pouncey said. “We’re going day-by-day now, but they’re just being cautious with us like they always do. But we’ll be fine. It might be a little difficult for me, but Ben’s injury is pretty serious. I wanted to play before the Super Bowl, but they held me out.
“It really wasn’t my idea, but it’s different this time. It could be a lot worse for me this time, but it’s nowhere near what I did before the Super Bowl. That was season-ending. It’s the same foot, but it’s better that I did it last year. Now, it can heal a lot faster.”

Charlie Batch took all the first-team snaps at quarterback Monday, but the Steelers also had a surprise addition to the rotation after he and Dennis Dixon completed their series.
“I’ve taken some snaps, and I’ll probably continue to take some snaps throughout the week,” Steelers wideout and former college quarterback Hines Ward said. “Hopefully, let’s hope that doesn’t happen (and Ward isn’t needed). (But) there’s really not a depth chart (at quarterback).
“They just said `Hines, get ready to take some snaps.’ But I don’t know where I’m at on the depth chart, as far as that aspect. But, hopefully, our guys will come back. Ben will come back. He’s a warrior, and whoever is his backup we’ll prepare for it and get ready to go to San Fran and see if we can pull one out.”
Ward noted that he still had some problems with his ankle sprain that occurred Oct. 23 at Arizona, but “hopefully, Ben’s injury isn’t as severe as people think.”

Steelers left offensive tackle Max Starks believed that both Roethlisberger and Pouncey would play against the 49ers Monday night.
“You look at what Ben went through just to get back in the game, I would think he’ll play if he can do it,” Starks said. “He’s had some time off, and I’m sure he’ll have a special shoe to wear. So, there’s a possibility that he can play. We’ll prepare for him not to be out there, but we’ll welcome him if he can play.
The same for Pouncey. I know he played at Florida, so he’s a tough SOB. But the same thing for him. He’s day-to-day, and we’ll prepare like he’s not going to be out there. But he’ll play if he can do it. I know both of those guys want to be out there if they can. I’ve been here way to long to count out anybody.
“So, we’ll see,” Starks added. “(But) Ben has been playing with a broken thumb, so nothing would surprise me. I was surprised when he made it out there for the second half, and he’s a consummate competitor. So, I’m constantly amazed by him, but never surprised. And I’m just glad that he’s my teammate.”

McLendon getting extra work at End

Ziggy Hood, the third player injured during the Browns game, was replaced at left defensive end by two players. Rookie No. 1 pick Cam Heyward was the first player off the bench, and then second-year pro Steve McLendon joined the rotation. McClendon also backed up Casey Hampton at nose tackle.
“We basically split the time there for Ziggy,” McLendon said. “I also had to play in the rotation at nose tackle, so I’d say we were pretty even in snaps. We played a couple series each. I started off at left end during practice (Monday), but it’s just practice. No matter what it is, it’s just practice.
“I think Ziggy’s going to play. He was just resting it today, and he needs that rest. But I think he’ll be fine. So, we’ll just take it one day at a time, and I’ll play wherever they need me. Sure, I’d like to start if Ziggy can’t play, but that’s not my decision. I’ll just do whatever they want me to do this week.”

While Doug Legursky was the first-team center, veterans Trai Essex and Chris Kemoeatu split reps at his left guard spot. … If Pouncey can’t play and Legursky is the center, some players believed that Essex would get the starting nod this time. … There was no official practice report Monday, as it’s not mandatory for teams until Wednesday, but LaMarr Woodley got some work in. It just not certain how much until an official list is released.