Morning Skate: Godard to return to the lineup 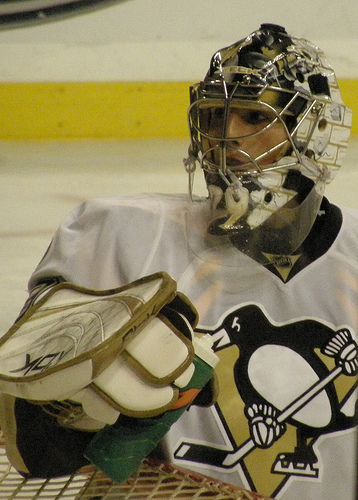 The Penguins just took the ice at 11:35 a.m. as the team prepares to take on the Tampa Bay Lightning tonight.
Enforcer Eric Godard will return to the lineup and will play on the 4th line. A source at the arena tells me there is currently some
line mis-matching going on and he will give me a full update on the lineup including an update on who will start in goal in the next 15-20 minutes.
more to come

Updated: 12:15 p.m. – Mathieu Garon was the last goalie on the ice, meaning¬†Marc Andre Fleury will start in goal. There was speculation that Garon could get a look tonight but that won’t be the case.
Lightning enforcers David Kocci and agitator Zenon Konopka will be in the lineup which is why Bylsma will put Godard back in the lineup.

Penguins Lineup
Kunitz – Crosby – Guerin
*Fedotenko – Malkin – Sykora
Cooke – Staal – Kennedy
Dupuis – Talbot – Godard
Defensemen
Orpik – Gonchar
Eaton – Letang
Gill – Scuderi
Lineupnews: Ruslan Fedotenko skated with Evgeni Malkin near the end of the morning skate, likely meaning Fedotenko will start the game on the second line.
This morning the Penguins used a few different combinations on a few breakout drills. One segment¬†had Malkin – Crosby – Sykora, Kunitz – Staal – Guerin and Tyler Kennedy centering the third line.
That is something we could see tonight for a few shifts. The coaching staff is trying to jumpstart Malkin’s line but Sykora has been the main problem.