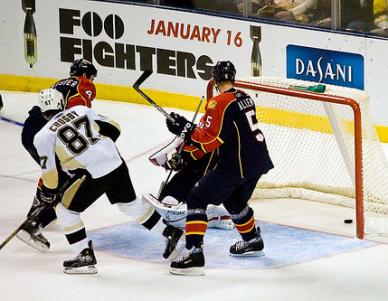 The Florida Panthers have made a few changes for tonight’s game upfront and in goal. Michael Frolik has been taking off of the Panthers first line.
Zednik – Horton – Booth
Stillman- Weiss-Dvorak
Olesz – Campbell – Peltonen
McLean – Kreps – Frolik
Defensemen
Bouwmeester – Skrastins
McCabe – Ballard
Boynton – Cullimore
Tomas Voukon will start in goal. Backup goaltender Craig Anderson has started the Panthers previous four games.
With four games remaining and two points behind the Rangers for 8th place in the Eastern Conference, the Panthers are in a must-win situation tonight.
For the Penguins they
did not hold a morning skate.
Marc Andre Fleury has been pushing to play tonight. Interim Bylsma was non-committal following last night’s game but the vibe around the room is Fleury will start tonight and Mathieu Garon will get the nod on Tuesday against the Lightning.
Updated: 3:57 p.m. – confirmed Fleury to start in goal
The Penguins will go with the same lineup as last night. Craig Adams will be in the lineup according to my source.
Photo courtesy of pointnshoot