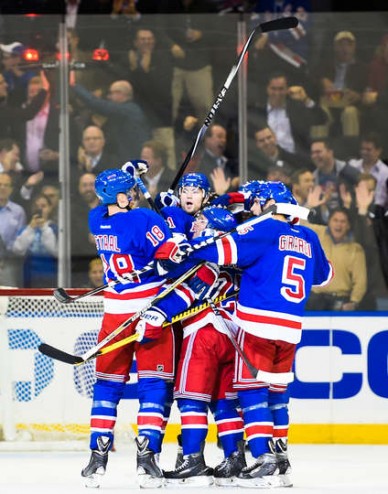 ON PENGUINS 5-0 LOSS TO RANGERS
The New York Rangers coming off what their coached deemed an embarrassing loss to the Oilers on Sunday night, attacked Tuesday’s game vs Penguins like it was a playoff game from an intensity level and Pittsburgh had no response to match the Rangers effort.
“I think it was preparation,” Penguins coach Mike Johnston said of the Penguins 5-0 loss. “It’s from the coaches to the players. We had to be a lot better prepared in the first 10 minutes than we were. I thought the second part of it was our response. Once we saw the level they were coming out with and how they were playing we had to respond, and I think it took us just way too long to respond.”
Different personnel in some spots but Tuesday night’s game looked like Games 5 and 6 of last years second round playoff series. The Rangers had a great game plan coming in and executed it perfectly.
Penguin defensemen don’t like to get hit and what the Rangers did was be relentless on the forecheck and used their speed to put the Penguins under constant pressure, especially the first 10-12 minutes of the first period.
By being aggressive on the forecheck and fast on the puck, New York opened the door to create turnovers off the Penguins breakout. One thing about the Penguins that doesn’t get magnified enough is their wingers cheat on the breakout. When a team can rattle the Penguins defensemen on the forecheck like the Rangers did, the wingers cheating on the breakout becomes more of a concern.
Case in point was the Rangers second goal of the game where Christian Ehrhoff makes a blind pass up the boards and Patric Hornqvist is nowhere to be found on the breakout along the right wall.
Another area the Rangers excelled at was defending the neutral zone. They had three forwards waiting for the Penguins and held the red line in the neutral zone extremely well, causing the Penguins similar problems that the Flyers did a few weeks ago.
Are the Rangers starting to become like the Flyers where they know how to game plan for the Penguins? Saturday night’s game will be telling.