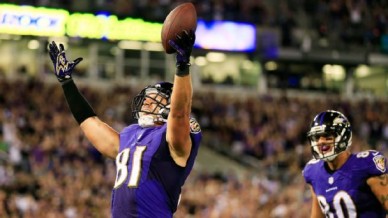 RAVENS 26 – STEELERS 6
Fans, pundits saying the AFC North goes through the Steelers, might want to take a step back. The Baltimore Ravens tonight trounced the rival Steelers 26-6 in a game the Steelers were so outplayed, a more accurate score would have been 38-6. The Steelers were outscored 16-3 in the second half and have now been outscored 40-6 in the second half this season. A team falling apart in the second half early in the season is concerning.
The Steelers offense, a group look at as needing to carry the Steelers this season due to a mediocre defense, have not scored a touchdown in over six quarters. Over their last six quarters, Steelers have been outscored 50-9.
Following a Justin Brown fumble in Ravens territory on the opening drive, the Steelers were unable to get anything going offensively and Pittsburgh was unable to take advantage of a depleted Ravens secondary. Baltimore did an excellent job of limiting explosive plays. The Steelers longest passing play was 27 yards to Antonio Brown, with 2:43 left in the game and the Steelers trailing 26-6.
QB Ben Roethlisberger completed 22 of 37 passes for 217 yards and was intercepted once and sacked twice in the loss. Pittsburgh turned the ball over three times and had nine penalties for 75 yards.
The concerning part for the Steelers is the same issues last year are being exposed again.
The Steelers have gotten quicker at the safety position with Mike Mitchell but better? No evidence of that yet. Pittsburgh’s best free safety might be sitting the bench in Shamarko Thomas.
When breaking down the Steelers defense, the inability to stop the run remains a major issue that isn’t going to suddenly go away. The Steelers front-seven was dominated by the Ravens O-line and constantly pushed back. Whether it’s Terrance West last week, Bernard Pierce and Justin Forsett this week, anybody can run on the Steelers as their Run-D in pitiful. Baltimore rushed for 157 yards, Pierce gained 96 yards on 22 carries and Forsett gashed for the Steelers for an explosive play, a 41 yard run in the second half.
The Steelers went out and attempted to bolster the D-line this off-season with the signing of Cam Thomas and whichever scout recommended to sign Thomas should be given his walking papers tomorrow. Dick LeBeau’s system is based on pressure from the outside and a d-line that is gap sound and wins the line of scrimmage battle by freeing up lanes for the linebackers. This group doesn’t have any of those factors right now. They might have one of the bottom-5 defensive lines in the entire NFL. Pittsburgh had no takeaways and no sacks vs Baltimore.
IS DICK LEBEAU THE ISSUE?

I know this is blasphemy amongst my Pittsburgh brethren, but I am starting to really question LeBeau

Former NFL scout Matt Williamson. now of Scouts Inc, isn’t the only one who is questioning LeBeau. As Williamson also points out, a defense failing to create 20 or more turnovers in three straight seasons is just unheard of and Pittsburgh could very well be headed towards a fourth straight season of not creating 20 turnovers.

The #Steelers D has FAILED to create 20 turnovers in each of the last 3 seasons…unheard of…and going for 4!

My take on LeBeau is this:
The Steelers loyalty is starting to hurt them from this stance. Arguments can be made that LeBeau is too old, 77 years old, probably should have retired by now, but it’s not that the game has passed him by, it’s the Steelers being locked in to LeBeau’s system is the problem. There’s been little adjustments around the talent coming in.
Personnel wise the Steelers aren’t built to play Lebeau’s system and that’s been the case for now going on a third season. Mike Tomlin was suppose to be a defensive mastermind when hired by the Steelers in 2007, yet, he’s never had an opportunity to implement his type of defense. Tomlin like everyone else has bought into continuing LeBeau’s system, despite the red flags being there that adjustments and possibly an over-haul is needed.
The Steelers are not some 5-11, 6-10 team, but there’s little to suggest this team is ready to return to contender status in the AFC like some have pegged them as a sexy pick to contend for AFC title. With a core of Roethlisberger, Le’Veon Bell and Antonio Brown, The offense will have more good days than bad, though, a big question remains whether this offense can evolve into a group that can truly outscore teams on any given night. While on the defensive side of the ball, three months from now many are going to agree it’s time for a new voice with new ideas to come in and take over the defense.