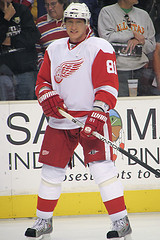 It was a rare sight Thursday night as the Detroit Red Wings imploded and Pittsburgh rattled off 3 goals in less than 6 minutes to take a 4-2 lead in the second period.
The Red Wings lacked composure and Penguins players indicated after the game that the team could hear the Red Wings chirping at each other on the bench.
Sources tell Inside Pittsburgh Sports, the finger pointing has begun from established veterans towards Marian Hossa.
The Red Wings have not been able to slow down Evgeni Malkin because of the absence of Pavel Datsyuk.
Hossa, the teams highest paid player with Nicklas Lidstrom, has zero goals in the series and has not stepped up and done his part to replace Datsyuk’s production.

The Red Wings are rattled right now but they aren’t down and out just yet. The team has the leadership and poise to rebound from Game 4 but the fingerpointing has begun and the Honeymoon may be over with Marian Hossa.