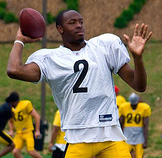 By Mike Bires
PITTSBURGH – Publicly, Steelers coach Mike Tomlin says we shouldn’t get too excited about off-season workouts. “It’s football in shorts,” he likes to say.
By that, Tomlin insinuates that the real test begins in late July when the Steelers report to Latrobe for the dog days of training camp. That’s when pads go on and hitting begins. That’s when “real” football begins.
Still, Tomlin loves the mandatory three-day minicamp held May 1-3 and the 14 sessions called organized team activities. It’s a chance to see all the new guys, particularly the 2009 draft picks. It’s also a chance to see a cast of returnees who have something to prove this season in more ways than one.
With that in mind, here’s a look back at some hot topics from minicamp and a look ahead to the 12 remaining OTAs which resume May 19:
THE BATTLE FOR THE NO. 3 WIDE RECEIVER SPOT
Uncertain that Limas Sweed can fill the void created by the free-agent defection of Nate Washington, the Steelers drafted a fleet-footed wideout in Mike Wallace in the third round and signed free-agent veteran Shaun McDonald.
With the second-fastest 40-yard dash time among wide receivers in the draft, Wallace definitely has intriguing potential as a long-ball threat. But the burner out of Ole Miss still has a long way to go in regards to ball catching skills and route running.
McDonald, a seventh-year pro who played with the Detroit Lions the last two seasons, could be a quick fix. He’s a Smurf at 5-foot-10, but he’s experienced. Two years ago, he caught 79 passes with the Lions.
But don’t count out Sweed, a second-round pick in the ’08 draft. He struggled last year as a rookie, and dropped that would-be 50-yard touchdown pass in the AFC Championship Game. But already he looks so much more confident.
“There’s going to be a change in the way I play,” Sweed promised.
TIMMONS TIME AT RIGHT INSIDE LINEBACKER
With Larry Foote missing minicamp by mutual consent – he didn’t want to be there, and Tomlin didn’t want him there – several Steelers expressed their love for the man who started 90 straight games (playoffs included) over the past five years.
But with Lawrence Timmons penciled in as the starter long before minicamp started, it only made sense that Foote be traded or released.
After all, Timmons was the 15th overall pick of the ’07 draft, and his $460,000 base salary is considerably lower than the $2.885 million Fote was due to make.
“I’m looking forward to playing with L.T.,” left inside linebacker James Farrior said. “Foote was one of my best friends on the team. We’ve been playing together for the last five years, so I’ll definitely miss him and all the things he brought to the table.
“But Lawrence is a good linebacker. He’s going to be one of the real good ones once he gets his stuff down. He’s one of the best athletes on the team.”
Foote, who was cut May 4 and then signed by Detroit, was a great Steeler in his own right. But it’s clearly time to let Timmons be an every-down player.
NEW BLOOD IN THE TRENCHES
The obvious need before the draft was on both lines. The Steelers addressed both areas early.
Ziggy Hood, the defensive tackle out of Missouri, was a terrific pick with the last pick of the first round. He’s a bright guy with a great attitude and a so-called “high motor.” Hood should have no trouble making the transition to D-end in the Steelers’ 3-4 base scheme.
Aaron Smith and Brett Keisel are entrenched as the starters, But Smith is 33 and Keisel will be 31. In a year or so, one of those two will be replaced by Hood.
On the offensive line, the Steelers chose Wisconsin guard Kraig Urbik with the first of their three third-round picks. In the seventh round, they took center A.Q. Shipley, a former Penn State star who attended Moon Area High School in suburban Pittsburgh.
Urbik (6-foot-5 and 323 pounds) may have a chance to move into the starting lineup at some point this year. If right guard Darnell Stapleton doesn’t perform better than last year when he replaced the injured and since-released Kendall Simmons, Urbik could move in.
Meanwhile, Shipley probably won’t play a down this year. He may not even dress for a game. But don’t be surprised if he makes the roster as the 10th O-lineman.
THE BATTLE FOR THE BACKUP QB JOB
After sitting out last year with a broken shoulder, Charlie Batch seems fully recovered. He looked sharp in minicamp. But don’t dismiss the possibility of Dennis Dixon serving as the No. 2 man behind superstar Ben Roethlisberger.
Batch is an adequate backup. But Dixon, a fifth-round pick last year, is an extraordinary athlete who’s fully recovered from a knee injury that cut short his senior season at Oregon.
The Steelers occasionally dabbled with the “wildcat” offense that was so popular in the league last year. With Dixon, they may use the “wildcat” even more. If they do, Dixon would be the No. 2 QB on game day while Batch would be designated the third-team QB.