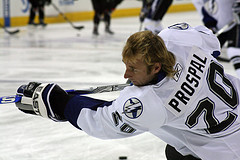 Will the Penguins explore the possibility of signing Prospal?
The Tampa Bay Lightning have informed the agent for Vinny Prospal, that the team will buyout the remaining 3 years on Prospals deal, according to the Tampa Bay Tribune.
Prospal who was reacquired from the Philadelphia Flyers before last season, signed a four-year contract worth $14 million last June. He has $10.5 million remaining on his deal.
Under the terms of the buyout, Prospal would receive two-thirds the remaining value of the contract spread out over twice the length of the remaining contract, which equates to $7 million over six years.
Prospal struggled last season with just 45 points (19 goals) with the Lightning and Flyers after potting 33 goals just two seasons ago for Tampa Bay.
Prospal, 34, can play center and wing. He will draw interest around the league as the Flyers, Red Wings and Rangers are already being mentioned as potential suitors.
Will the Penguins look into Prospal? A league source believes they will but indicates the Penguins interest will likely be lukewarm.
Reasons why Prospal could be attractive to the Penguins
1. The organization doesn’t feel Max Talbot will hold up on Evgeni Malkin’s line for a long period of time.
2. The team is not active in pursuing a winger but they don’t want to rush any of their young players into the NHL. Internally they have always said if there’s a good fit at the right price, they would explore a move.
3. The team looked into Prospal prior to the 2008 trade deadline.
4. Look for the front office to discuss Prospal with their scouting staff and if there is strong consensus that the team should look into him, then the team would see if Prospal is willing to take a Jay McKee type of deal around $700,000 – $800,000,