ROETHLISBERGER IS ONE OF A KIND 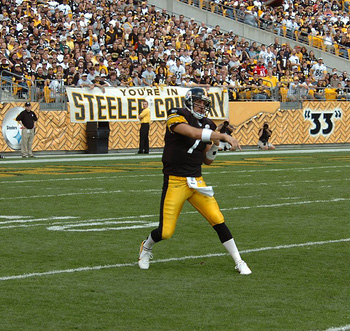 I’m usually the last guy who pays attention to what announcers say before, during and after games on TV. But what I heard before, during and after Monday Night Football on ESPN drove me NUTS.
The lowlight was when Matt Millen said that Ben Roethlisberger is tough to coach and tough to coach against, and that he ruins precision. Like a two-time Super Bowl-winning quarterback really needs to be evaluated by the architect of the total collapse of the once-proud Detroit Lions franchise, Mr. 0-16 Matt Millen.
In some twisted way, Millen was attempting to compliment Roethlisberger. But it was so ham-fisted, it seemed insulting. When analysts praise Roethlisberger, it usually comes off as clumsy, condescending, or damning with faint praise. It’s never unconditional.
Despite being on pace to break Terry Bradshaw’s team record for passing yards in a season by over 1,000, Roethlisberger still doesn’t get proper respect from jerks like Trent Dilfer. Even now, he’s routinely omitted from on-line polls for NFL MVP.
Are the analysts really that stupid?
Yes. But that’s not the whole story.
There’s never been a quarterback like Roethlisberger. Never so big, so mobile and so improvisational. Ben isn’t cookie-cutter, so “experts” with no imagination, twits who can’t think outside the box, don’t understand. They want every quarterback to stand in the pocket, set up, and fire darts from his ear like Dan Marino.
But on a given play, Roethlisberger can scramble as well as any quarterback ever, THEN fire a dart from his ear. Ben can’t be pigeonholed. He doesn’t fit the Marino mold, doesn’t fit the Michael Vick mold. He’s a hybrid. The “experts” don’t get it.
May I’m no “expert,” but I get it.
You’d think the “experts” would at least understand the stats. Roethlisberger ranks first in the NFL in completion percentage, fourth in quarterback rating and fifth in yards. He has a 2/1 TD/INT ratio. Those are fantastic numbers, and they don’t lie.
It’s disgusting. Roethlisberger has always been a winner. Brett Favre and Peyton Manning are trying to catch up when it comes to Super Bowls. Drew Brees has never gotten a sniff. Tony Romo never will. Now Ben has the numbers, too, but remains underrated.
For whatever reason, the “experts” seem to have decided they just don’t like Ben Roethlisberger. Maybe it’s stupidity, maybe it’s jealousy. In Dilfer’s case, I’m betting it’s both.
No matter. The best revenge is winning. Maybe the “experts” will wise up by the time Roethlisberger is inducted into the Pro Football Hall of Fame. Maybe Detroit will even finish above .500 by then.
For me, the highlight of ESPN’s MNF coverage was the post-game interview with Rashard Mendenhall. Mendenhall looked totally confused, maybe sedated, perhaps even brain-damaged or lobotomized. RUN, FORREST, RUN!
Mark Madden hosts a radio show 3-6 p.m. on WXDX-FM (105.9).