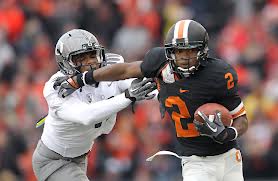 By Dale Grdnic
PITTSBURGH — Pittsburgh Steelers offensive coordinator Todd Haley, and just about every fan who follows the club, believed running back and wide receiver were two needs for the team’s offense this season.
So, when Haley stepped to the podium late Friday night to discuss the Steelers’ third-round pick, he was all smiles. The Steelers selected Oregon State wideout Markus Wheaton with the 79th overall pick during the NFL Draft.
“It’s good when I get up here twice,” Haley said, referring to his previous appearance in the media room after the Steelers took running back Le’Veon Bell in the second round. “It’s good to see everybody again. … (Wheaton) is a highly productive receiver from Oregon State.
“He was a four-year guy (who) also handled the ball as a runner a bunch, which we also liked from a versatility standpoint. (And) he brings speed to the team. He is a fast guy. Make no mistake about it, a guy that can stretch the field (who) plays inside-out. So, he’s a pretty versatile football player.”
Wheaton reportedly ran a 4.45-second 40-yard dash at the NFL Combine, which disappointed the player. But Haley said he plays a lot faster and quicker and shows that any time one sees him on tape. Wheaton offered what he believed was a more realistic 40 time.
“I think I can go 4.3,” Wheaton said, noting that he has run that fast before. But for those who want to compare Wheaton to now-departed Mike Wallace, Haley addressed that issue.
“He has a little different skill-set than Mike, other than the speed,” Haley said. “Where Mike is more of an outside receiver, playing outside the numbers, Markus played in the slot a bunch when he wasn’t outside. So, he has a little bit more of a running back build. It’s hard for anybody to run faster than Mike, but this guy does play fast. (And) he’s one of the guys who we thought, when the ball’s in his hands, he’s even more exciting.
“That leaves the door open for doing a lot of things with this guy, and it goes along with A.B. (Antonio Brown) and Emmanuel (Sanders). We need competition, and receiver position was one of the ones going into it where we knew we wanted to add to the competition. So, we like the guys we have here, but to get another young guy in here to compete and push the other guys is always a good thing.”
Wheaton lined up in several different spots in the Oregon State offense and set a school record with 227 catches for 2,994 yards and 16 touchdowns in 49 career games. He also ran the ball for 631 yards and five scores and returned several punts and kickoffs as a senior. He didn’t do much returning overall, however, but played on some coverage teams.
Haley believed that didn’t just make him versatile, but intelligent, since he had to be prepared for all aspects of the offense for the Beavers.
“I like being all over the place,” Wheaton said. “The defense can’t really plan for you when they don’t know where you’re going to be. So, I like being all over the place. … I’m going to have to show you (how smart I am) when I get there. I did have to know pretty much everything, pretty much all the concepts about the offense.”
The 2013 NFL Draft concludes Saturday with rounds 4-7 beginning at noon. Each team can take five minutes per pick in those rounds. The Steelers have two sixth-round picks and one in each of the other rounds.