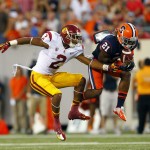 By Dale Grdnic
PITTSBURGH — The need for a safety, as well as the availability of a player they ranked highly, forced the Pittsburgh Steelers to trade up to get Syracuse’s Shamarko Thomas with the 111th overall pick in the fourth round during the 2013 NFL Draft Saturday afternoon.
According to Steelers secondary coach Carnell Lake, the club had the 5-foot-9, 217-pound Thomas rated among the top safeties. However, he believed the hard-hitting strong safety likely fell into the fourth round due to his height.
“Shamarko is an outstanding football player,” Lake said. “I think if he had two more inches, he’d have been in the first round, in my opinion. That’s how highly I think of this young man. He has size. He has speed, and he has strength.
“He’s very aware on the field. He not only can play safety, but he also can get up there and play man-to-man on a slot receiver. … Not only do I think he’ll do well for our secondary, but the special teams as well.”
Thomas started 39 of 48 games for the Orange at both safety positions, in nickel situations and even a bit at cornerback. On one occasion, when Syracuse faced Southern Cal, Thomas covered 6-foot, 201-pounder Robert Woods like a blanket and even had an interception. Woods was a second-round pick by the Buffalo Bills this year.
“I definitely thought the Steelers were going to pick me up,” Thomas said. “I had a great visit. I loved all the defensive coaches, all the coaches. … I’ll play anywhere they want me to. I just want to be on the field.
“It was a great game that we had, and I played pretty good against Woods and Matt Barkley. We came out and competed every down, and I just wanted to come up and hit someone on every play that I had the chance.”
That attitude, and the fact that it happened more often than not, caused Thomas to have some concussion issues at Syracuse. But Lake said he didn’t have a problem with the player’s size or his previous concussions.
“The kid has a 40-inch vertical, and that kind of explosiveness gives him great range in making plays,” Lake said. “I see him playing safety. The great thing about this young man is if you were in a pinch, and you didn’t want to put the nickel package out there and wanted him to play man-to-man in the slot, he could do it. … That’s the kind of safety I like (and one) that the Steelers were looking for. Not only will he cover well, but he will hit you and hit you hard.
“The way the game is played now, and the way he plays the game, he has had concussions before. But they haven’t been an issue with the medical staff. And the safeties on our team have had issues. It comes with the territory back there. (But) I don’t see it as an issue. He’s not a headhunter, but he just makes good, strong tackles. And most of them, he’s wrapping up with his arms and shoulders. So, I don’t think we have a problem with him leading with his head.”
There has been speculation that playing in Dick LeBeau’s defense as a young player is among the most difficult tasks in the NFL. Lake didn’t believe it would be a problem for Thomas.
“My job is to get him ready,” Lake said. “(And) this is my third year here, and it hasn’t really been that much of an issue. We got Cortez Allen reach his first year. Keenan (Lewis) was struggling, and I got him ready to go. And he was productive as ever. I wish we could have kept him. I don’t think this will be a problem with this young man … especially with a year under his belt, because he’s played so many positions for Syracuse.”
Note: Lake said cornerback Ike Taylor has been in the building recently and looked as good as ever, coming off a broken bone in his foot that caused him to miss the final four games last season. “I’ve talked with Ike, (and) he has always been in great shape,” Lake said. “So, I don’t have an issue with Ike at all.”