Sanchez, Wilson close to being dealt? 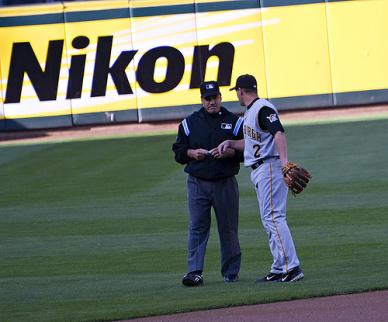 The Pirates have informed Freddy Sanchez that a trade is close.
Sources tell TIOPS that Sanchez was informed he will not be in the lineup until after Friday’s July 31st deadline, if a trade falls through. Sanchez and Jack Wilson have been scratched from tonight’s lineup.
Live Updates
11:00 p.m. – As things stand right now; Pirates remain in deep discussions with the Giants and Twins. The Giants have turned away from Nick Johnson and are committed to completing a deal for Sanchez.
Talks have progressed with the Giants in the past 10-12 hours because both sides came to a mutual agreement that if the Pirates eat some of Sanchez’s salary, the Giants are willing to include higher rated prospects into a deal. Although, it is not set in stone that the Pirates will pay part of Sanchez’s salary in a potential deal.
Cubs emerged again this afternoon as a suitor as the two teams have held extensive talks about John Grabow. Cubs remain a longshot to land Sanchez but they are back in the mix, sources tell TIOPS.
10:44 p.m. – Giants, Pirates discussed Zach Duke during the All-Star break but their have only been brief talks about Duke since. Giants unwilling to meet the Pirates demands.
10:39 p.m. – Word from Minnesota is that the Twins expect Sanchez to end up in San Francisco by tomorrow evening. Will they make a late push?????
The Twins have yet to engage in trade talks with the Pirates about Jack Wilson. They have looked at Wilson but no on-going discussions. Could change if the Twins strike out for Orlando Cabrera and Freddy Sanchez.
Since the weekend there have been strong indications that Wilson will end up in Boston but we have been down that road before.
10:31 p.m. – To clairify, Guzman has been discussed as the MLB ready prospect that would be heading to Pittsburgh not the top prospect in a potential deal.
10:12 p.m. – Contrary to reports, there has been no indications that the Angels, Tigers and Braves are looking at Sanchez.
9:54 p.m. – Twins trying to land a reliever in any deal for Sanchez. They were linked to Matt Capps earlier this month but their efforts have currently been with John Grabow. Also, FoxSports.com reports, the twins are scouting Jays shortstop Mark Scutaro tonight.
9:50 p.m. – Pirates top priority at the deadline is to add pitching (preferably LHP) and main priority going into next season is to add a right handed bat to team with Pedro Alvarez for the future.
8:29 p.m. – ****Framework of a deal with the Giants has been discussed. Pirates willing to pay some of Sanchez’s salary for next season in return for three prospects. Jesus Guzman (“AAA” .336 BA – 12 HR – 59RBI’s) would be the top MLB ready prospect heading to Pittsburgh
A deal is not official though and if the two sides agree to a deal within the next 12 hours, it will not be announced until after Wednesday’s game.
8:00 p.m. – The Pirates remain in serious discussions with the Twins, Giants but a third team joined the mix again this afternoon.
That team was the Chicago Cubs, sources tell TIOPS. The Cubs have been “kicking the tires” on Sanchez for sometime but ownership issues have plagued their ability to be serious suitors. They remain a long-shot though.
* 7:24 p.m. – The Pirates are much closer to dealing Freddy Sanchez than Jack Wilson.
*Pirates, Red Sox continue to have serious discussions regarding Wilson. The framework of a deal has been discussed but the Red Sox can’t officially make a deal for Wilson until other trade fronts are finalized.