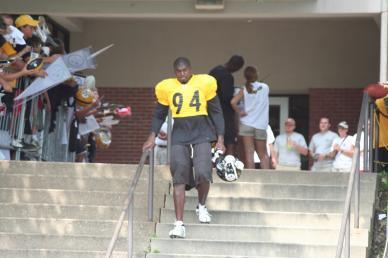 Mike Bires
PITTSBURGH _ Respectfully, Lawrence Timmons and Travis Kirschke would like to disagree with the Steelers’ injury report.
Officially, Timmons and Kirschke are listed as doubtful for Monday night’s game against the Denver Broncos. That means they have only a 25 percent chance of playing.
But Saturday, both said they will not play.
“I’m out,” said Timmons, an inside linebacker who suffered a sprained ankle in the Oct. 25 win over Minnesota.
“No, I’m not playing,” said Kirshke, a defensive end who suffered a torn calf muscle against the Vikings.
That means that Keyaron Fox will make his third start of the year in place of Timmons, who missed the first two games of the season with a sprained ankle.
Meanwhile, Nick Eason will make only the fourth start of his seven-year career. He’ll replace Kirschke, who had started the past two games after Aaron Smith suffered a season-ending shoulder injury.
CLARK TIRED OF MEDIA BLITZ
Another day went by without Steelers coach Mike Tomlin definitively saying if free safety Ryan Clark will play or sit Monday night.
Tomlin did list Clark as
questionable on the injury report due to the life-threatening scare Clark experienced two years ago after playing at Invesco Field at Mile High.
As a sickle cell trait carrier, Clark became ill when the combination of over-exerting himself and the rarified air in Colorado negatively affected his blood.
“Please, don’t ask,” a frustrated Clark said after practice Saturday when a reported asked him if he’s playing.
If Clark sits out as expected, his place will likely be filled by committee. The candidates are safeties Tryone Carter and Ryan Mundy as well as backup cornerbacks Deshea Townsend and Keiwan Ratliff.
“If Clark can’t go, either me or Ryan (Mundy) will start,” said Carter, who started four games earlier in the season at strong safety when Troy Polamalu was out with a sprained knee.
“I don’t know,” Mundy said when asked Saturday if he’ll start. “Either way, I’m going to play a lot.”
RESPECT FOR DENVER’S DEFENSE
One of Tomlin’s favorite saying when talking about an opponent is “best in the world.”
He used that phrase two weeks ago to describe Minnesota running back Adrian Peterson.
Well, Tomin has been at it again this week in describing the Broncos’ defense.
“They’re the No. 1 defense in the world,” Steelers quarterback Ben Roethlisberger said. “That’s what we’ve heard Coach Tomlin say 1,000 times already this week.”
It may be a bit early to start comparing the Broncos to some of the best NFL defenses in recent years. But they are ranked No. 1 in the league in fewest yards allowed so far this season.
They’re also No. 3 against the run, No. 8 against the pass and No. 2 in scoring defense (13.7 ppg).
By comparison, the Steelers are No. 8 in overall defense, No. 1 vs. the run, No. 16 vs. the pass and No. 6 in scoring defense (18.4 ppg)
In three of the past five seasons, it’s been the Steelers who ranked No. 1 in total defense