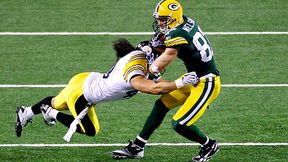 — The Green Bay Packers did exactly what the Steelers thought they would; Spread them out. The thought process was at least from my standpoint is that coming into game, if the Packers went this route, the Steelers eventually would get a big turnover or two on defense that would change the dynamic of the game..
That never happened and the Packers proved me wrong on that front.
— The Packers scored 21 points off of 3 Steelers turnovers. “Usually, when you lose, it’s because of turnovers, ” head coach Mike Tomlin said….”But they made plays. It’s probably less about what we were unable to do than what they were able to do.”
That’s of course the big topic after the game but in a sense, the Steelers just never showed the ability to slow down the Packers offense who exploited the Steelers with their explosive slant packages.
Of note, several Packer drives were stalled by the Packers not the Steelers…There were at least two or three big drops by Packers receivers on third downs that stalled drives and would have been big plays.
Another under-rated part of the Packers performance is that although they pretty much abandoned the run, they were able to run the ball effectively when they did go to the run. James Starks had 52 yards on 11 carries, including a long run of 14 yards. He averaged 4.7 yards per carry.
— The Steelers defensively were a step slow the entire game when it came to their coverage and reads, especially from their safeties, Troy Polamalu and Ryan Clark.
Polamalu in fact, played one of the worst games I’ve ever seen him play. Polamalu played that center field safety role, as expected, and was only lined up 5 yards within the line of scrimmage on 3 of the Packers 55 offensive snaps, according ESPN STATS.
Polamalu didn’t record a tackle until the 4th quarter and was a step or two behind in coverage, getting beat by Greg Jennings for two touchdown scores.
“I had some opportunities to make some plays,” Polamalu said. “I was just off a step here or there.”
The turnovers of course did the Steelers in but the disapointing part from a defensive standpoint is that the Steelers didn’t find away to make a key turnover or two. They pride themselves on that.
— The Steelers lack of depth in their secondary was exploited but it is time for the Steelers to reconsider their scheme when it comes to defending the pass. Obviously there’s issues personnel wise, especially at cornerback but the Steelers scheme against the spread offense has to change going into next season.
Rodgers completed 14 of his 24 attempts for 207 yards and two touchdowns on Sunday against the Steelers defense when they went to 5 cornerbacks or more.
— Ben Roethlisberger took the blame for the loss and coming into the game, this was the stage for him to claim his stake as one of the NFL’s top quarterbacks, in the eyes of the doubters around the league.
This game doesn’t change my opinion of him one bit but we’re already seeing the national media taking shots at him and downplaying his status as an elite quarterback.
“I feel like I let the city of Pittsburgh down, the fans, my coaches and my teammates and it’s not a good feeling,” said Roethlisberger, who reportedly later buried his head in a towel and wept.
There are three throws Roethlisberger would obviously want back; The two interceptions and overthrowing Mike Wallace near the endzone on a deep pass as Wallace had the Packers in one-on-one coverage.
— Offensively the Steelers were pretty much able to move the ball at will. That’s why the Steelers feel they gave this game away.
Rashard Mendenhall ran the ball extremely well as did Isaac Redman and Mewelde Moore when they got opportunities. The Steelers rushed for 126 yards, averaging 5.5 yards per carry.
— Penalties were almost just as costly as the turnovers for the Steelers. Ryan Mundy’s block in the back on kick return that put Steelers deep in their next territory. Next play, Roethlisberger intercepted for a pick-6.
Keyaron Fox personal foul penalty on the kickoff leading to the Steelers final drive put them back to their own 13 yard line. Inexcusable from a Special Teams captain and this wasn’t out of character from Fox this season.
— What was interesting on the the Steelers misfiring on the final drive of the game was the decision to go Mike Wallace’s way on the final drive. Although the Steelers were pressed for time and only had one timeout, it was odd to see Roethlisberger go towards Wallace twice in two of his final three throws, including the 4th and 5, when Roethlisberger had Hines Ward and Heath Miller at his disposal.
— In the end, the most surprising thing to come out of last night’s game was the Steelers looking like the “newbies”, at least they did early in the game. The Packers came out of the gates with a calm poise about them and the Steelers seem to press a little too much when they got down 7-0.
Final Note: The Packers stars outshined the Steelers. Aaron Rodgers outplayed Ben Roethlisberger but again the Steelers showed resilience. They deserve a lot of credit on that front but in the end, the Packers came up with more big plays, earning their 4th Super Bowl title.