1. “Scripted offense?” – Ben Lovejoy made comments during the telecast of last nights game in how the Penguins have a “scripted offense” for the defensemen and in a good way Lovejoy said he’s never seen something like it before. The comment caught my attention at the time but even more so when a former college hockey coach texted me after the game asking if I had heard it. His argument has been that the Penguins are being over-coached and its playing a part in the Penguins lack of creativity from the forwards.
Goals are down throughout the league but the Penguins lack of identity offensively and lack of creativity from their forwards has been something never seen during the Crosby era. I’ve touched base on some issues pertaining to the system over the past couple weeks such as the Penguins inability to create consistent offense through the center of the ice and an emphasis on defensemen creating offense from the outside.
In Juniors, Mike Johnston’s system was tailored towards defensemen and saw skilled defensemen like Derrick Pouliot, Joe Morrow put up huge numbers and we’ve seen that translate to Kris Letang at the NHL level, but the Penguins don’t have six Kris Letang’s and get little offensive production from their d-men outside of Letang.
Just maybe the “scripted offense” put in place has the Penguins over-coached right now.
2. The Penguins have some of the best doctors available to them you’re going to find anywhere but that doesn’t stop the organization from continued issues with handling of players who are recovering from concussions. Christian Ehrhoff is the latest example and the Penguins not being cautious enough is coming back to bite them.
Ehrhoff suffered a concussion vs the Capitals on Jan 28. He misses about a month and returns on February 25 vs Washington and takes some hard hits in the game from the likes of Tom Wilson and than is out of the lineup again.
On March 3, Ehrhoff and Mike Johnson both admit Ehrhoff had suffered some recurring symptoms. “I had a little bump in the road,” Ehrhoff said on Tuesday, March 3. “I felt great Wednesday [Feb 25 vs Washington] coming back and the next day, too. But I had some symptoms again.” So the Penguins and Ehrhoff both admit he’s dealing with recurring symptoms and the team decided it was a good idea to fly him across the country so he can practice with the team during their four game road trip (3-4/3-9) earlier this month.
Tarasenko sending Ehrhoff flying into the boards last night was all on Ehrhoff. He played the hit like a player whose scared to get hit and the consequences was potentially another concussion as Ehrhoff was woozy when stepping onto the bench and walking to the room.
Ehrhoff has been dealing with headaches off and on for nearly two months now. Impossible for the Penguins to count on him moving forward and for a player whose 33 this summer, had two poor years in Buffalo to go with concussion issues this season in Pittsburgh, he’s not going to get the type of deal his camp has envisioned.

Christian Ehrhoff who has dealt with headaches that come and go for almost two months now, lasted just 2 shifts http://t.co/DuLOcSAcyB

3. Last night was the first time I actually felt bad for Chris Kunitz. Everything is in his head right now and you can tell he’s embarrassed with his play and just has no answers. His game has come crashing down and I had one team source tell me the Kunitz situation is starting to remind him of Mark Recchi. Recchi’s game starting plummeting late in the 2006-2007 season and continued into the start of the 2007-2008 season, leading to the Penguins trading him to Atlanta.
Recchi had the same type of sudden fall in going from a first line player to playing like a 4th liner. Moving on to another situation helped Recchi have another couple productive seasons, including a Stanley Cup in Boston, and Kunitz going to another situation where he’s not counted on as a top line winger could be the best thing for him.

4. Mike Tomlin at the owners meetings expressed excitement in the Steelers getting back to being one of the NFL’s best defenses. With the personnel in place right now, it’s going to be a stretch that the Steelers become a top-10 defense anytime soon but one thing you hear out of the organization is Tomlin felt LeBeau got stale over the past couple years.
“I’m looking forward to the impact he can have of putting his spin on what we have been doing,” Tomlin said via Scott Brown of ESPN. “I am excited about how that might make us different and more competitive as we move forward. Change isn’t something that I fear. If you are trying to be the very best that you can be you can’t have that mentality.”
One area where the Steelers are expected to get much more aggressive at under Butler is getting to the quarterback with blitz schemes, something LeBeau went away from as players like Jason Worilds were dropping back in coverage much more in 2014 than previous years. 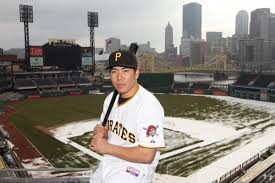 5. Neal Huntington in January on Jung Ho Kang — “We have zero intent of sending Kang to Minor Leagues.” The Pirates are starting to rethink that stance as Kang has been overmatched at the plate and overwhelmed with the whole situation.
Kang is hitting .111 in spring training and is 0 for his last 15 after an 0-4 day at the plate vs the Orioles on Tuesday.
Here is Tom Singer’s (Pirates.com) writeup on Kang yesterday when he returned to the lineup:
[“The Pirates are giving Jung Ho Kang all that the club believes he needs — plenty of at-bats. Kang hasn’t yet reciprocated by giving the Bucs what they need. Resurfacing on Tuesday after three days in the baseball workshop, Kang was the Bucs’ lone position player to play all nine innings in a 9-2 defeat to the Orioles. However, an 0-for-4 extended his hitless streak to 15 at-bats and two more strikeouts gave him nine in that stretch. Kang will be out of the lineup for the Bucs’ next game, Thursday against the Braves at McKechnie Field. Instead, he will return to Pirate City to get “six to eight at-bats” in a Minor League exhibition. With Neil Walker serving as the DH, Kang played second, where he had a comprehensive day. He initiated a double play in the first, was the middleman in four other twin-killings, miscommunicated with first baseman Pedro Alvarez on an infield pop up that they let drop, drew a mental/physical error for being out of place on a throw from the outfield and handled multiple routine grounders.” ] — Tom Singer Pirates.com
— Check out the TIOPS Daily Five Monday – Friday’s —

Fleury gets rocked in return to Pittsburgh

Marc Andre Fleury’s return to Pittsburgh didn’t just not go well, it was a downright disaster for the 2021 Vezina Trophy Winner. Pittsburgh scored 15 seconds into the game and the route was on as Fleury was pulled 11:25 into the first period after allowing 4 goals on 10 ...