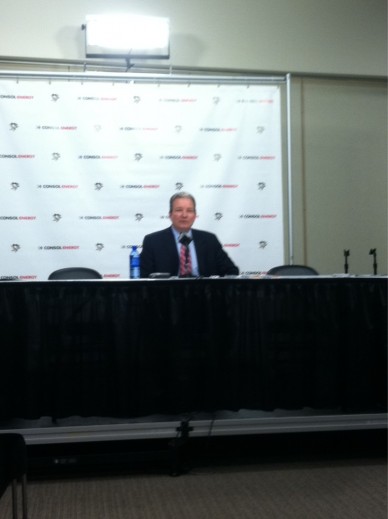 SHERO PRESS CONFERENCE
Penguins GM Ray Shero held his season ending press conference and Shero admitted that he has a “Big Summer” ahead.
Shero came out in defense of head coach Dan Bylsma and believes Bylsma is still the right coach moving forward. “I think Dan Bylsma is the right coach for our team, fortunate to have him, ” Shero said.
Shero also doesn’t expect to make any changes with Bylsma’s assistants. ” I like our coaching staff. “No one is more disappointed than Tony on the penalty kill in the playoff, ” Shero said. “I anticipate moving forward with this staff.”
AUDIO LINK: Ray Shero Audio
THREE CENTER MODEL TO BE RE-EVALUATED
— In evaluating this team, Shero expects a long evaluation process but Shero admitted several times about the uncertainty of the collective bargaining agreement impacting the off-season, though he will approach the off-season with a business as usual approach.
“Our group in the playoffs to a man, we didn’t do the job, ” Shero said. We underperformed and we have to figure it out and that’s on me, ” Shero said
“Big summer for us with our core and collective bargaining agreement, ” Shero said.
The most intriguing thing to come out of Shero’s press conference is that he’s at least open to re-evaluating the current three center model or feels he will be forced to, due to the uncertainty of the CBA.
“Their three great centers and we have to look and see where we are, ” Shero said. “That’s a model that has worked in the past.” Shero though indicated it’s something he has to evaluate and see if it will still work moving forward.
“I”m not sure, ” Shero said on whether he feels he will be able to sign Sidney Crosby and Jordan Staal this summer. “Need to sit down with them and see where we are. Goal is to resign both of them, ” Shero said.
“Again they aren’t diminished or taking back seat, ” head coach Dan Bylsma said. “Jordan Staal’s minutes, matchups same as Sid and Geno, ” Bylsma said.
HOW PENS DEFEND
— A hot topic in Pens circles is the Penguins style of play. Shero seemed to indicate there won’t be major tweaks to the Penguins system. ” I don’t think we were easy to play against, ” Shero said. “Physically we defended the right way.”
Among the top storylines in how the Penguins defend will be futures of Paul Martin and Zbynek Michalek. “They both have three years left, ” Shero said. “When we signed both, we went from 20th to 6th against. “They were big part of that”
“I think Ray Shero has put very good cast of players together as a GM and I think we believe in how we play, we believe in what we do, ” Bylsma said.
“We don’t give up a lot of shots and were hard to play against, ” Shero said.
BLUELINE PROSPECTS
— The Penguins have a deep group of defensemen prospects with as many three prospectsÂ being NHL ready next season. Shero said he’s not against prospects developing at the NHL level, which could put a Joe Morrow in play next fall. “Always open to developing {young defensemen at NHL level}, ” Shero said.
LEADERSHIP
— There’s talk on message boards and talk shows that the Penguins miss a Billy Guerin type veteran player from a leadership point. Shero though doesn’t see it that way. “One thing I won’t question is this team’s character and leadership, ” Shero said. “Why it unraveled in 10 days is my job, ” and the mindset Shero appears to be taking this off-season is weighing the positives of the regular season and negatives from the playoffs and final 10 games of the regular season and figuring out whether this current group just hit a small bump in the road or a big overhaul is needed.