SHORT, BUT NOT ON ACUMEN 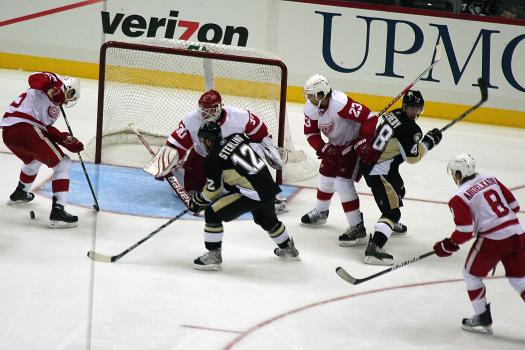 By Mark Madden
As I interviewed Brett Sterling after the Penguins’ exhibition win over Detroit, I thought, “This guy’s not so short. I’m only a little bit taller.” Then I realized he was on skates, and I was sitting.
Vaudeville aside, I wrote Sterling off even after he scored twice in a training camp scrimmage. Too small at 5-7. Career busher.
Now, after his showing (and goal) vs. Detroit, I’m not so sure.
Sterling knows how to score. I’m not referencing the 55 goals he tallied in one American Hockey League season, or anything he’s netted so far this preseason. But watch him.
Sterling is always in the right place, his body and stick square to the potential pass, ready to adjust, ready for second chances. He’s a bit reminiscent of Robbie Brown. Not nearly the hockey IQ, but Sterling has the scoring basics.
Sterling isn’t afraid to go the net, not even at circus-midget height. Coach Disco has certainly noticed.
“He’s done it around the paint as much as he’s done it with his shot,” Bylsma noted after the Penguins subdued Detroit, 5-1. “He scored from the paint in our intra-squad games and he did it again tonight. Everything being equal, you always want a bigger guy. But when it comes to puck battles, the dirty areas and scoring goals, size doesn’t matter if you can do it.”
When asked what’s kept him out of the NHL, Sterling didn’t reference height. Being taller than Kenny the Kangaroo is not a requirement, it turns out.
“I was in an organization [Atlanta] that was struggling to win games,” said Sterling, 26. “I was in and out of the lineup, and that’s tough when you’re a young guy. Other than that, it’s been translating my game from the American league to the NHL.”
This just in: The NHL has good goalies. Better players, too.
“Yeah, the goaltenders are better, and the players are in better position constantly,” Sterling said. “You’ve got guys who have been in this league a long time. They know how to play, they’re always in the right position, and they’re stronger. Bigger, faster, stronger – as clichéd as it is, it’s true about the NHL.”
Sterling skated with Sidney Crosby in the Pens’ first exhibition, reaping the benefits with a goal-mouth finish off Sid’s pass.
“He’s always going, always moving, always got speed, and he makes the smart play,” Sterling said. “Look at the goal I was able to get. He could easily have shot that puck, but he saw me back-door at the last second. He just gave me an easy tap-in.”
Crosby occasionally surprises teammates with unexpected passes. Not Sterling.
“With a guy like that, I expect the puck every time,” Sterling said. “If he gets it to you, great, bury that chance. If he doesn’t, he has a great shot, too. But you have to be ready at all times.”
Sterling has to be ready IMMEDIATELY. If a legitimate shot at NHL glory is ever going to come his way, now may be the time.
To be honest, I still don’t see it. I don’t see a 5-7 guy prospering in today’s NHL. When it comes to noteworthy twerps, Sterling seems closer to Eric Boguniecki than Martin St. Louis. He’s an inch shorter than the former, two inches shorter than the latter.
But the Penguins need a goal-scoring wing. It might be worth taking a chance on Sterling, at least at season’s start.
Notes: The Penguins made their first round of cuts this morning: Forwards Jesse Boulerice, Chris Collins, Joey Haddad, Nick Petersen, Ryan Schnell, Zack Sill, Alex Smigelski, Keven Veilleux and Geoff Walker, defensemen Jason DeSantis, Derek Peltier and Carl Sneep, and goaltender Patrick Killeen.
Mark Madden hosts a radio show 3-6 p.m. weekdays on WXDX-FM (105.9).