Sound familiar? When it comes to criticism for Team Russia, Malkin gets to hide behind Ovechkin 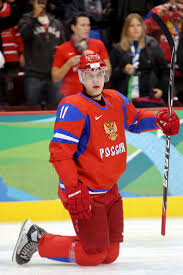 It was another Olympic disappointment for Russia, losing to Finland, 3-1, in the quarterfinals. Was it a shock to see Finland win? Absolutely not. They played better throughout the tournament and were the more complete team.
Just like in the NHL during the Stanley Cup playoffs, teams with excellent goaltending that have balance throughout their lineup and are four lines deep, are having the most success in the Olympics.
Russia was extremely top heavy and while Pavel Datsyuk played his heart out, most of their stars were duds in the tournament, namely Alexander Ovechkin and Evgeni Malkin.
Malkin a two-time NHL scoring champion and looked at by many in Pittsburgh as the second best player in the world, was a huge disappointment with no points in his last four games. He never elevated his game when things weren’t going well for him individually and was outplayed by lesser players such as Alexander Radulov.
Malkin has it great in Pittsburgh where no one makes a fuss that he rarely talks to the media and he never has to answer the bell when things go bad as he gets to hide behind Sidney Crosby. Yes, he takes criticism from the message boards, such, but because of the presence of Crosby, he gets to play pressure free in Pittsburgh. In Russia he has the same thing with Ovechkin as no one will feel the wrath more for Team Russia’s quick exit than Ovechkin.
Russia’s coach already made Ovechkin the scapegoat. “Well, it’s difficult to explain why we didn’t score, especially the players who usually score a lot in their games, especially Alexander Ovechkin, who scored over 40 goals. I cannot explain so far,” Russia’s head coach Zinetula Bilyaletdinov said.
Pierre LeBrun has a great article up at ESPN.com on Ovechkin being the poster boy for Russian hockey and why he will take the wrath of criticism for the quick exit because of that. “Ovechkin was hardly the only passenger on a Russian team that seemed to wilt under the pressure of a host nation’s golden dreams,” LeBrun writes. “Linemate Evgeni Malkin could not have been more invisible in this tournament, for example. But it’s Ovechkin who is the poster boy for Russian hockey, whose face adorns Coca-Cola machines here.”
Malkin is without a question a better player than Ovechkin but it will be Ovechkin’s reputation that takes the biggest hit for Russia’s quick exit.