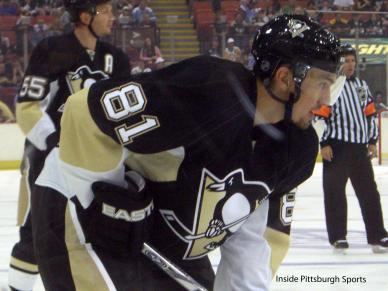 A decision was expected on Tuesday regarding Miroslav Satan‚Äôs future with the organization but according to sources
the team has gone back and fourth about whether to bring Miroslav Satan back to the Penguins. Some in the organization believe he still has a role on this team filling in for players like Petr Sykora. The concern over Sykora‚Äôs injury has the Penguins holding off on an official decision today. The dilemma the Penguins have if they bring Miroslav Satan back, it will cost the team Philippe Boucher who should be available to return to the team later this month.
Boucher will begin skating later this week and is hopeful to come off of IR in 12-15 days. Due to the salary cap the Penguins do not have the financial capacity to add both players to the roster.
Would the Penguins rather have Miroslav Satan filling in on Evgeni Malkin‚Äôs line then Pascal Dupuis? Some in the organization do and that‚Äôs why there hasn‚Äôt been any movement on the Satan front just yet. As an official decision was pushed back today, there should be some movement on the Satan front in the next 72 hours.