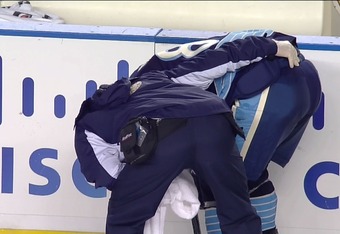 David Steckel will face the Pittsburgh Penguins tonight for the third time since his controversial hit on Sidney Crosby in the Winter Classic on Jan 1. This time, however, Steckel will face Pittsburgh for the first time in a New Jersey Devils uniform.
Steckel’s hit on Crosby is seen by some pundits as the main reason Crosby has been unable to shake post-concussions symptoms, as many NHL insiders believe he was not properly treated following the hit. Crosby was not diagnosed with a concussion until January 6th.
Steckel called the hit unintentional today and said he’s not sure if the Penguins will look for more action against him.
“It was completely unintentional,” Steckel said on Friday. “I didn’t mean to hit him at all. I tried to get out of the way. And it’s unfortunate because I feel bad that he’s been out for so long. It’s one of those things that’s obviously uncertain.”
“I’ve already played them twice [when I was] with Washington,” Steckel said. “So it’s gonna be what it’s gonna be. I can’t control that.”
Steckel reportedly said he hasn’t spoken with Crosby since the hit.
“I talked to Deryk Engelland after the game and I said ‘Tell Sid I’m really sorry. I didn’t see him at all,'” Steckel said.
Source: ESPN New York.com