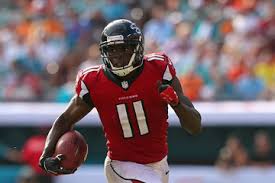 JONES, HARRISON, TAYLOR, GILBERT ALL INACTIVE
The football gods might be on the Steelers side today. Falcons Star wide receiver Julio Jones is inactive after suffering a hip injury late in Monday night’s game against the Green Bay Packers.
Jones a freakish athlete at 6-3, 220 lbs, had 11 catches for 259 yards and 1 touchdown vs the Packers. He would have been a nightmare matchup for the Steelers.
With Jones out, the Steelers have moved to three point favorites.
Also out for the Falcons is starting safety William Moore.
For the Steelers of note, James Harrison, Ike Taylor, and Marcus Gilbert are inactive.
Arthur Moats will get the start at ROLB for the second straight game. Moats who played just 31 snaps vs the Bengals, had 2 sacks in 9 pass rushes vs the Bengals. Jarvis Jones played 34 snaps vs the Bengals and had 1 QB hurry, rushing the passer 26 times.
Per Pro Football Focus, Ike Taylor was credited with allowing 9 catches for 141 yards and 1 touchdown vs the Bengals before being benched due to his play and injury.