Steelers enter camp with high hopes of repeating as champions 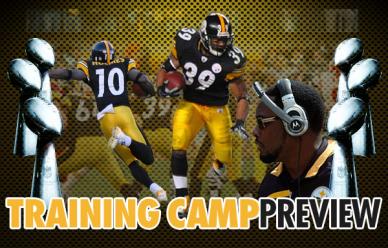 By Mike Bires
One by one, the Pittsburgh Steelers will pull into St. Vincent College today for what figures to be a most interesting training camp.
This is the 43rd straight year they’ve settled into their summertime digs in the Laurel Highlands, but seldom, if ever, have they come to Latrobe with so many intriguing issues on the table.
To be sure, the Steelers have a lot going for them. After all, they are the reigning world champions.
No less than 20 of 22 men who started in Super Bowl XLIII are back including star quarterback Ben Roethlisberger and linebacker James Harrison, the NFL’s 2008 Defensive Player of the Year.
Still, even a team as talented as the Steelers has question marks.
Of course, the No. 1 issue is their collective state of mind now that they’re beginning a Super Bowl defense with a sexual assault lawsuit hanging over Roethlisberger, the face of the franchise.
“If you are going to be good, distractions are a part of it,” coach Mike Tomlin said almost prophetically back in June after the last of the off-season workouts at team headquarters in Pittsburgh.
“I am more concerned about embracing that and dealing with it and performing in the midst of it as opposed of being resistant to it. We have the desire to be a good team, a consistently good team, a world championship caliber team. You have to acknowledge some attention, some potential distractions come with that. I am not running away from that.”
Back in the summer of 2006 when the Steelers began their Super Bowl XL defense, they, too, had several issues. Among them were the uncertainly of Bill Cowher’s desire to keep coaching; replacing the talent and leadership of Jerome Bettis, who had retired; and the hangover from finally winning “One for the Thumb.”
But most significantly, the Steelers went into that ’06 season with Roethlisberger coming off a near-fatal motorcycle accident. He also missed the season opener with appendicitis and also suffered a mid-season concussion.
All those problems prevented the Steelers from even making the playoffs.
“Coming back after the Super Bowl, I think we had that cockiness that we could just walk over anybody. But we ended up struggling,” wide receiver Hines Ward said of the ’06 debacle. “Just being 8-8, that’s the most disappointing thing. You win the Super Bowl, and the next year you don’t even making the playoffs.”
It’s hard to imagine the Steelers going 8-8 this year. On paper, they are clearly the dominate team in the AFC North. Some prognosticators see no reason why they can’t duplicate or improve on their 12-4 regular-season record of last year.
That being said, there are some concerns that may affect their chances of advancing deep in the playoffs.
Among them are:
1. Roethlisberger’s state of mind now that he’s being sued for sexual assault.
2. The ongoing saga of the offensive line, which, once again, is the team’s weakest link.
3. Lawrence Timmons, the Steelers’ first-round pick in the 2007 draft, replacing Larry Foote at inside linebacker.
4. William Gay replacing Bryant McFadden as a starting cornerback.
5. Finding a No. 3 wide receiver who can produce like Nate Washington did last year.
6. Determining how to split carries in a backfield that includes Willie Parker and Rashard Mendenhall, the ’08 first-round pick who missed most of his rookie season with a broken shoulder.
7. The waist-line of Casey Hampton, the burly nose tackle who was the center of controversy last summer after reporting to camp fat and out of shape.
8. Continued Improvement on the special teams, most notably in the kick-return phase and at punter where Daniel Sepulveda returns after missing ’08 with a knee injury.
9. Life without Dan Rooney, the venerable Hall of Fame team chairman who leaves the Steelers for a post as the United States’ ambassador to Ireland.
10. Avoiding the so-called Super Bowl hangover.
“When we get to training camp, I’m sure one of us veterans will get up and talk because you have to have a new sense of urgency. What happened last year is over,” Ward said.
“Once we report to camp, our quest is to still be a driven group, to go out and play hard, and not worry about (this year’s) Super Bowl being in Miami, but just putting in the foundation at camp and not thinking that we can just walk into any game and beat anybody because we the champions.”
For the Steelers, in all begins in earnest Saturday morning with the first practice of training camp.
More Training Camp News
Dixon looks to unseat Charlie Batch