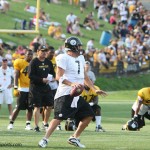 *Rumblings, Musings, Opinions*
1. STEELERS MAKE RIGHT DECISION ON BEN FOR NOW- The tradition of the Steelers extending their starting quarterbacks with two years left on their contracts has been wiped out for now.
In August 1999, then starter Kordell Stewart had two years left on his contract and signed a five year extension worth around $27.5 million.
In 2008, Ben Roethlisberger had two years left on his contract and the team dished out a mega 8 year, $102 million extension to Roethlisberger.
Roethlisberger isn’t so lucky this time around and difference then is Roethlisberger was in his 20’s, as was Stewart. Still let’s not feel bad for Ben, he’s still going to get another big contract eventually and will make $23 million the next two seasons.
The question is are the Steelers making the right move by not rewarding Roethlisberger with an extension now? From a financial and business standpoint they are making the right move.
Roethlisberger is not 25, 26 years old where his value is going to only rise in a year or two. What he’s worth now is what he’s going to be worth (or slightly less) a year or two from now.
One route I’ve talked about in the past that can’t be ruled out is the Steelers franchising Roethlisberger after 2015 season and then finding a way to negotiate a short-term deal when he’s hitting his mid-30’s.
2. RISKY DECISION FROM WORILDS? – When you breakdown the Steelers on what’s at stake for one individual, there’s no one with more pressure than Jason Worilds who will play on a one year, $9.754 million transition tag. The Steelers have no plans to extend Worilds this summer after he declined a five year deal in the neighborhood of $32 million with a $10 million signing bonus, an NFL source said.
There’s been no talks since and none are expected. Worilds gets to enjoy a hell of a payday this year but long-term, for an unproven player, that Steelers offer could look nice six months from now if Worilds has a bad season.
3. KEISEL NOT IN PLANS FOR NOW – The Steelers will go into camp without long-time veteran Brett Keisel who remains unsigned. There was one point about a month ago where it looked likely that Keisel would return but he has not come down on his asking price of about $2 million. Pittsburgh had been willing to offer the veteran league minimum. There is still a chance that the Steelers come calling for Keisel at somepoint. For now they are banking on 2nd round pick Stephon Tuitt and Cam Thomas to replace Keisel.
4. You know it’s “officially” football season when a guy named Reggie calls into The Cook and Poni show on 937 The Fan this morning and argues that Landry Jones can start over Ben Roethlisberger this season.

5. CONFIDENCE IN MELANCON? – Pirates reliever Mark Melancon has not blown a save since officially becoming the Pirates closer on June 20th. The Pirates in search for bullpen help leading up to the July 31st deadline, does not include someone who the Pirates feel could potentially replace Melancon. Management is very comfortable with Melancon in the closer’s role but what could become disastrous for the Pirates is if Melancon fades down the stretch like he did last year.
Melancon had 3 blown saves and a 4.22 ERA last September and a 9.82 ERA in the post-season. What was concerning with Melancon last year down the stretch is he started looking like he didn’t have the mental fortitude when the pressure intensified. Pittsburgh had the luxury of turning to Jason Grilli when Melancon faltered last year.
— Check out DePaoli’s “The Daily Five” Monday through Friday for thoughts on some of the hottest topics on The Pittsburgh Sports scene —