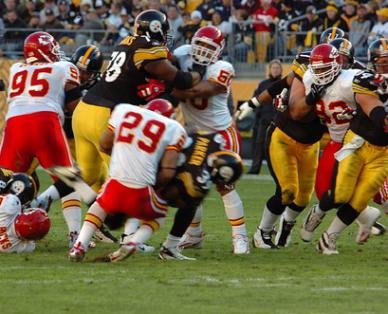 By Mike Bires
“Big Ben” was back on the job Thursday.
Just one day after injuring his left knee at an organized team activity workout, Ben Roethlisberger returned to practice.
Obviously, the tweak or bruise he suffered Wednesday was not serious.
Roethlisberger, the Steelers’ star quarterback, did wear one of those black rubber sleeves on his knee. But he showed no signs of pain or discomfort like he did when missing the second half of Wednesday’s OTA.
Neither Roethlisberger, coach Mike Tomlin or anyone from the Steelers’ media relations staff would comment on the injury.
***
Max Starks doesn’t want to talk much about his upcoming wedding, but his teammates keep hounding him about it.
One of the Steelers wrote on the locker room bulletin board, “Only 23 days left in Max’s life as he knows it.”
“I’m getting a lot of ribbing over it,” the mammoth left tackle said with a chuckle. “But I’m ready to take the plunge. I’m marrying a terrific lady.”
As he finalizing plans for his wedding, Starks is also keeping tabs with his agent as he and the Steelers continue to negotiate a long-term contract.
Maybe because he’s focusing so much on his wedding, but Starks doesn’t appear in a hurry to get the deal done.
On one hand, Starks wouldn’t mind securing a multi-year deal. Then again, if the numbers aren’t right, he’ll gladly take the $8.45 million he’ll make this year as a “franchise” player. “Franchise” players earn the average of the top five salaries at their position.
Starks is one of several starters in the last year of his existing contract. Traditionally, the Rooney family doesn’t engage in contract talks once a season starts, so if Starks is to get a new deal, it must happen between now and Sept. 10.
Last year Starks was paid $6.895 million when the Steelers tagged him as a “transition” player, which is paid the average of the top 10 salaries at his position.
***
The start of training camp is just 57 days away.
The Steelers will report to training camp at St. Vincent College on Friday, July 31. Their first practice will be on Saturday, Aug. 1. They will be in Latrobe until breaking camp on Aug. 21.
Shortly after they report, the Steelers will take part in their annual running/conditioning test. Then starting on Aug. 1, they’ll practice for 11 straight days – several of them are two-a-day workouts – before getting a day off prior to their first pre-season game.
That’s on Thursday, Aug. 13 against the Arizona Cardinals at Heinz Field.
All afternoon practices at camp are open to the public and begin at 2:55 p.m.
The only night practice the Steelers will have this summer at camp will be on Friday, Aug. 7 at Latrobe Memorial Stadium in downtown Latrobe.
***
Even though he’s been spending a lot of time at safety during OTAs, Deshea Townsend isn’t switching positions.
“I’m still a cornerback,” he said. “I’ve been playing a lot of safety primarily to give the younger guys a look.”
Towsend, 33, was talking in particular about rookie corners Keenan Lewis and Joe Burnett, who were drafted in the third and fifth rounds, respectively.
“People have been talking about me moving to safety for five years now,” Townsend said. “But like I said, I’m still a corner, most definitely. I may move to safety some day, but not yet”
Townsend, who’s in the last year of his existing contract, celebrates his 34th birthday on Sept. 8, two days before the season opener against the Tennessee Titans.
***
Daniel Sepulveda, who hadn’t been punting in recent weeks due to arthroscopic knee surgery on April 22, is now kicking at OTAs.
After a solid rookie year, Sepulveda missed last year’s Super Bowl season with a training camp knee injury that needed surgery.
***
The second annual Hines Ward Celebrity Softball Game will be played at 1 p.m. Saturday at the Duquesne University baseball field in Green Tree.
Ward will be joined by several teammates in a game against local celebrities including former Steeler defensive back Mike Logan and Ken Laird, who both work for 1250 ESPN Radio, Sonni Abatta from KDKA-TV, Sally Wiggin from WTAE-TV and Sewickley’s Megan Parris, who appeared in the 13th edition of ABC-TV’s “The Bachelor”.
Steelers expected to play are Roethlisberger, defensive end Brett Keisel, linebackers James Harrison and James Farrior, kicker Jeff Reed, wide receiver Santonio Holmes, running back Willie Parker, cornerback Ike Taylor, Townsend and Starks.
Although there’s no charge to watch the game, donations will be accepted to benefit the families of the four Pittsburgh police officers killed in the line of duty this year.
Bleacher seating is limited. Spectators may bring lawn chairs and/or blankets.
For more information, call 412-244-4563.